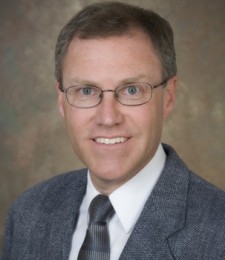 
When studying the processes underpinning disease and other biological systems, biochemists often need accurate estimates of reaction rates. Optical biosensors are a popular way to measure such reactions, as they do not disturb the underlying system. Correctly interpreting biosensor data requires having an accurate mathematical model for the system. Dr. Edwards has been working on models for these biosensors for over 15 years, focusing in particular on the BIAcore biosensor. The models involve partial differential equations that take into account not only the reactions, but also the transport in the biosensor. The PDE can often be reduced to an ordinary integrodifferential equation in experimentally relevant regimes.

Since surface plasmon resonance (SPR) and similar biosensors typically measure only mass changes, it can be difficult to analyze data from multiple simultaneous reactions. Current models do not work well when multiple reactions are occurring simultaneously. Areas of recent interest concern the formulation of a new model that will provide scientists a general roadmap on how to design experiments to analyze multiple reactions that occur at the same time (either crosslinked reactions or multicomponent reactions). A current area of biological interest is the study of translesion DNA synthesis, which is essential for cells to cope with DNA damage.