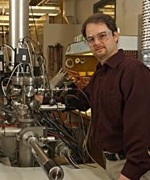 Molecule corrals are nanometer-sized pits that can be formed with a high degree of control on the basal plane of highly oriented pyrolytic graphite (HOPG). They have a number of unique features that make them useful for several purposes: (1) They can be produced by a simple benchtop oxidative process in an oven operating in the ambient air, producing CO2 (g); (2) They can be produced with a diameter from one nanometer to several microns by varying the total reaction time used to produce them, and they can be produced in both monolayer-deep and multilayer-deep versions, with depth control; (3) They are produced in an inherently parallel process, covering the entire surface; (4) They can be produced with a density that ranges from less than 1 per µm2 to more than 100 per µm2; (5) Once formed, they can be used in a range of diverse applications and fundamental studies. Using patterned arrays of molecule corrals, we are currently working on templated nanostructures and controlled polymerization of corral-bound molecular arrays, producing novel nanostructures with conductivity along molecular chains.