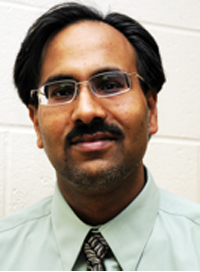 
Our lab conducts research in the fields of genetics, molecular genetics and genomics using plants as the biological system of interest.  We are primarily working with common bean (Phaseolus vulgaris).

Genetics and Molecular Genetics of Disease Resistance in Beans:

Our work on disease resistance of beans involves investigation of the interaction of beans with the bean rust fungal pathogen, Uromyces appendiculatus that causes a disease called bean rust.  The bean rust pathogen causes significant losses in yield and we have identified several genes, which confer resistance.  Using a combination of genetic, molecular, and genomic tools we are investigating both the host and pathogen components of these interactions.  The short-term goal is to identify and isolate genes responsible for disease resistance which include a gene called Crg, which is necessary for classical rust resistance provided by the Ur-3 gene.  The long-term goal of this project is to better understand the mechanism of disease resistance in beans and to contribute to the production of stronger (disease-resistant) varieties.

Identification of the Transcriptome of Common Bean Using Next Generation Sequencing Technologies:

The common bean genome is approximately 600 mega base pairs (Mbp), which makes it a good model species for studying sequence organization and evolution of the legume family. The legume family consists of crops such as soybeans, peas, Lotus, Medicago (a relative of alfalfa). We are using cutting edge sequencing methods that have been developed in the last few years to identify the complete sequence of the “expressed” portion of the common bean genome. By using two methods such as the Illumina and Roche/454 FLX technologies, we are concurrently identifying common bean sequences approximately 35 bases and 250 bases derived from ribose nucleic acid (RNA) taken from several bean tissues. These tissues include flowers, leaves, roots and green pods. Once we have accumulated these sequences, the next step is to organize these sequences and then compare them to sequences which have already been derived from model plant genomes such as rice and Arabidopsis. This research will aid in discovering genes in common bean in addition to identifying classes of genes that may be specific to legumes in general.

Dr. Kalavacharla is the principal investigator for the NSF-funded Research Experiences for Undergraduates (REU) Site in Molecular Genetics & Genomics, and DSU PI for the Experimental Program to Stimulate Competitive Research (EPSCoR) programs. Additionally, he is currently funded by the United States Department of Agriculture (USDA) for two research grants in the area of plant molecular genetics & genomics. Dr. Kalavacharla has mentored/co-mentored more than 23 undergraduate students at DSU. Dr. Kalavacharla has also served as a reviewer for NSF and USDA grants and as a panel member for the USDA National Research Initiative Plant Biology Program.