Expert on blood clots wins over $1 million in research grants 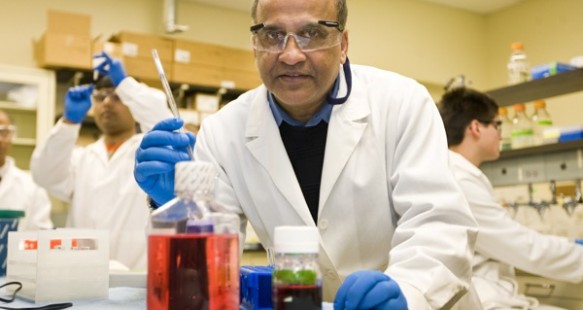 Ulhas Naik, professor of biological sciences and director of the Delaware Cardiovascular Research Center, pores over laboratory data on his computer, even during breakfast most mornings.

He is on a quest to tease out the roles that various blood components play in the formation of clots. These “plugs” can be lifesavers, stopping the flow of blood from cuts and wounds. They also can be killers — causing a stroke or heart attack when they block up an artery.

Better understanding the biological players in clot formation could lead to new thrombotic therapies for those at high risk of heart attack and stroke. Naik’s research is so promising that he recently won over $1.3 million in research grants to continue his studies.

The National Institutes of Health (NIH) awarded Naik a $1.2 million grant to further explore a powerful clot inhibitor he previously identified, known as junctional adhesion molecule A (JAM-A). Found on the surface of blood platelets, it protects against unwanted clot formation, but scientists do not yet know how. Naik and his research team will be working to pinpoint the mechanism in this new study.

With a $154,000 American Heart Association grant in aid, Naik will be testing a new compound he and his team recently synthesized to block the stress-activated enzyme, ASK1, which also is found in blood platelets. This is in addition to an NIH grant of over $1.3 million he received earlier this year to study the function of ASK1 in thrombosis. When under stress, ASK1 signals other proteins to spur the platelets to get to work at forming a clot.

The goal, Naik explains, is to develop an effective anti-thrombotic agent — a compound that will prevent the formation of a blood clot in circulation, but not inhibit the process of hemostasis, which arrests bleeding when you cut your finger.

“There is no drug at present that stops only one type of clotting, but not the other,” Naik says. “We believe our compound will affect thrombosis, but not hemostasis. We will know for certain after this ‘proof of principle’ research.”