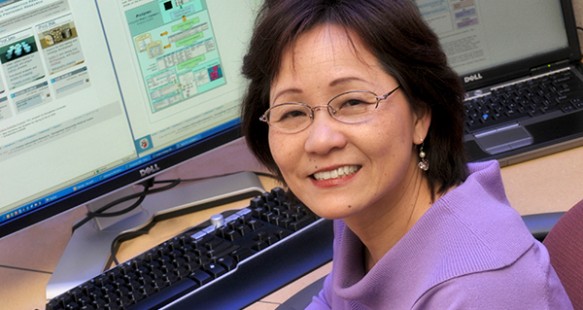 Just as poultry is steadily gaining in popularity on dinner plates, the chicken is growing in attractiveness as a biomedical model for studying health issues ranging from headaches and ovarian cancer to cystic fibrosis and muscular dystrophy.

It turns out that the chicken may also help researchers better understand diabetes and obesity.
A team including the University of Delaware’s Larry Cogburn and Cathy Wu recently published a paper in PLOS One demonstrating that adipose tissue may be more than just a place for the body to store fat — it may actually be an important organ that contributes to novel endocrine signaling, which involves the blood clotting mechanism, and the synthesis or export of fatty acids.

The paper was published in collaboration with Jean Simon and his colleagues at INRA, the French National Institute for Agricultural Research.

The two genotypes, known as the FL (fat line) and LL (lean line), have provided a rich foundation for research over the past three decades — a foundation that has been made even more robust in recent years by the development of powerful genomic tools and bioinformatics capabilities at UD.

The research team examined differential gene expression in the abdominal fat of juvenile FL and LL chickens using next-generation RNA sequencing, which provides a genome-wide snapshot of the presence and quantity of RNA at a given point in time. The differentially expressed adipose genes were then used for extensive mapping to metabolic pathways and gene interaction networks.

The researchers were very surprised at what they found.

“The accepted belief has been that in both birds and humans, fat is primarily made in the liver and transported to adipose tissue for storage,” Cogburn says. “But we found that a large quantity of lipids was actually being synthesized in the abdominal fat of FL chickens. This suggests that in situ lipogenesis in chickens could contribute more substantially to the expansion of visceral fat mass than was previously thought.”

In other words, it is easier for the genetically fat chickens to become even fatter.

The researchers also found differential expression of numerous genes involved in hemostasis, or blood clotting, in the fat and lean chickens, with the majority of hemostasis genes up-regulated in visceral fat 0f the LL. The results suggest that these coagulation factors could play a novel role in limiting the expansion of fat mass in the lean chickens.

The detailed findings shared in the 41-page research article indicate that the genetic deck is stacked against the fat chickens, while the lean chickens are blessed with genes that favor reduced synthesis and enhanced breakdown of lipids, accompanied by greater accumulation of protein in breast muscle.

Cogburn urges caution in making too many assumptions about human obesity based on chicken genetics, since chickens have evolved different mechanisms that control food intake, lipogenesis and adiposity.

“Chickens lack five of the adipokines — cell-signaling proteins secreted by fat tissue — that are known to play a role in appetite, energy metabolism and adipogenesis in humans,” he says.

“However, this work has provided us with a unique avian model of juvenile-onset obesity and glucose-insulin imbalance that could provide new insights into these issues in humans and lead to better ways to prevent and treat one of the 21st century’s most significant public health problems — the world-wide obesity epidemic.”