Genome Profiling Chairman and CEO Jeb Connor (left) and Chief Science Officer Adam Marsh are using a unique method of analyzing DNA to develop diagnostic tests that could better predict whether a cancer will be aggressive and how best to fight the disease. 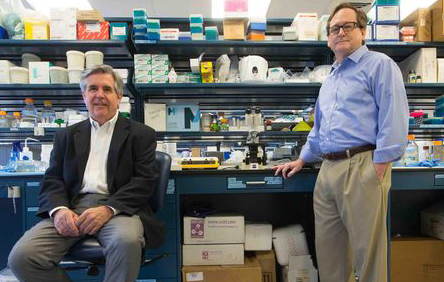 What if a blood sample taken by a family physician could diagnose breast cancer months – or even years – before a woman feels the first lump in her chest?

Now imagine if that diagnoses also came with a treatment plan so well-tailored to a patient’s genetic makeup that it could eliminate the guess work involved in early chemotherapy and radiation used today.

“Early diagnoses and faster routes to effective treatment would mean more people could survive the disease and have a much better quality of life,” entrepreneur Jeb Connor said. “A test like this has the potential to change patient care as we know it.”

Connor and Adam Marsh, an associate professor at the University of Delaware, say they have found the key that could someday make those tests readily available.

There, the company is building a track record to prove the validity of its methods, while also contributing valuable data to help advance the latest research in the field.

“Today, we know certain genes are responsible for creating breast cancer,” said Dr. Nicholas Petrelli, the medical director of the Graham Cancer Center. “By working with our clinicians and researchers on early detection, GenPro could help prevent the cancer from every (manifesting) in those women. And our hopes is that they will be able to extend that to colon, rectal, thyroid and ovarian cancer in the next decade.”

The science behind the secret

GenPro’s major breakthrough is essentially an advanced software analytics platform that can identify the genetic signatures of various cancers and other diseases.

Marsh first developed the company’s platform while researching how climate change might impact invertebrates living under the sea in Antarctica as part of his day job at UD’s School of Marine Science and Policy.

“These polychaete worms are used to a very stable environment, so I was looking at how their genes might regulate how they will deal with the thermal stresses they’ll be experiencing in the coming decades,” he said. “I had a very limited budget and – necessity being the mother of invention – I just took a very novel approach to the computational statistical modeling that was required.”

Realizing those models could be used to analyze markers in the human genome, Marsh teamed up with Connor, a former senior manager at Hewlett-Packard with a track record of building start-ups into successful companies.

Together, they licensed the technology from UD and began developing real world applications.

“To understand how GenPro’s process works, it helps to first understand a little about how genes work,” Connor said.

The genetic material of every human being includes an assembly of about 3 billion base pairs that make up the two strands of DNA in the infamous double helix.

The order of those pairs is basically the full instruction manual for building every human cell.

What makes a liver cell different from a skin cell is determined by which pages in the manual are marked for reading – almost like a Choose Your Own Adventure book.

Marking those pages is the job of chemical compounds and proteins called the epigenome.

Yet the way the epigenome’s marks are interpreted can be affected by lifestyle and environmental factors – such as stress, diet and exposure to substances like nicotine.

As a result, instructions that should tell cells to stop multiplying can be misread as directions to keep growing, eventually resulting in tumors.

By mapping exactly which pages have been marked and whether those markings say “read” or “skip,” GenPro can diagnose diseases before a patient develops their first symptom.

And those same maps also can be used to develop individually tailored treatments based on which pages are being misread in each patient’s DNA.

“For instance, we’re about to start a study with a large group of leukemia patients who will receive four months of treatment on a chemotherapy drug,” Marsh said. “So we’ll look at the epi-markers in these patients prior to treatment.”

By mapping those markers before and after treatment and comparing that data to the patients who respond to the drug, they hope to isolate a signature that can predict which patients will and won’t respond in the future.

“We’ll be able to prevent a patient from having to undergo four months of being sick and nauseous with no positive results,” he said. “You’ll get to start a treatment suited to you sooner, thus reducing total time from diagnoses to remission.”

That promise is what attracted the interest of the Center for Translational Cancer Research (CTCR) – a collaboration between Christiana Care, A.I. duPont Children’s Hospital, the University of Delaware and the Delaware Biotechnology Institute.

First conceived a decade ago, the center opened in a 7,000-square-foot laboratory space on the fourth floor of the Helen Graham Cancer Center in 2010.

“The vision for this unit was to develop a multi-disciplinary approach that combines scientists, clinicians, graduate students and biotech companies,” Petrelli said. “You combine those disciplines right smack in the middle of a cancer center that sees the majority of cancer cases in Delaware and it becomes the perfect environment for finding better treatments, better biomarkers and better methods for detecting cancer earlier.”

“One of the problems we have is the over diagnosis of breast cancer, because we can’t discriminate which types are likely to be aggressive and which ones will be slow growing,” she said. “So right now, everyone is treated with radiation and many with chemotherapy, as well. GenPro’s technology could potentially identify a way we could monitor women for changes in their cancer and only treat cases where we’re seeing an aggressive pattern develop.”

While GenPro is currently focused on cancer research, Connor and Marsh say their analytical technique also has shown promise in the early diagnoses of Parkinson’s disease, which often goes undetected until the first symptoms appear – often years after actual onset.

“The technology to develop the markers for many different diseases is really the fundamental big picture value that we have,” Connor said. “And we’ve demonstrated it in a neurodegenerative disease, a couple of cancer-related diseases and we’re well-positioned to progress into other diseases that are out there.”

GenPro’s specialty is identifying the signature of various diseases in the epigenome.

But comparing that signature to a specific patient requires doctors to know how that individual’s genes are sequenced.

Scientific advances made in the last decade have improved the cost of such sequencing, resulting in a proliferation of labs capable of conducting the data-intensive work.

Industry analysts predict the global next generation sequencing market will grow by 20 percent over the next five years.

But for now sequencing the genes of patients as part of a predictive screening process is still costly.

And Connor and Marsh say it may not actually be needed.

“By discovering and cataloging these epimarker signatures, it’s possible that they could be translated into a simple diagnostic test that gives a positive or negative indication, like a traffic light,” Connor said. “And that test might only cost dollars instead of thousands of dollars.”

He and Marsh say they are in talks with several major biopharmaceutical companies that may be interested in developing the epimarker signatures discovered by GenPro into commercially available diagnostic tests.

In the meantime, the company is continuing its work with the CTCR and other clinical institutions to refine their work and expand its potential applications.

“Do the algorithms work? Do they predict? Do they quantify? Is it repeatable? Is it sensitive? Is it specific to a variety of different things,” Connor said. “All those aspects are foundationally solid and defensible. Now it’s ready to be taken to the next steps.”