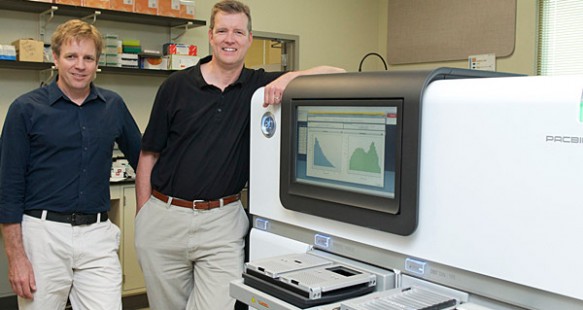 The Delaware Biotechnology Institute (DBI) at the University of Delaware has been equipped with a state-of-the-art Pacific Biosciences RS DNA sequencing machine to help researchers obtain genetic information, making UD one of the few universities in the country equipped with the advanced device. In fact, at the time of its installation, UD was the 25th site in the world to house such a machine.

The machine came to UD and DBI thanks to a $744,538 National Science Foundation (NSF) award and is stationed in the UD Sequencing and Genotyping Center, which is run by Bruce Kingham and provides genomic technology services for University research groups as well as outside investigators.

UD is in a unique spot with the machine because, as K. Eric Wommack, professor of environmental microbiology in the Department of Plant and Soil Sciences, explained, “Most of the places that have the Pacific Biosciences machine are large sequencing centers that sequence the human genome through massive amounts of sequencing, or they’re government labs. I believe we are one of the few research Universities without a medical school that has one of these instruments.”

Because of this, the sequencing machine will be used in unique ways, branching out into areas such as environmental and agricultural studies, with Wommack being one of the first UD professors to use the machine for research purposes.

The grant will focus on three areas of research. The first is in the area of single cell genomics, in which Wommack and his collaborator at the Bigelow Marine Laboratory in Maine will pull a single bacterial cell out of an environmental sample and sequence its genome.

The third application is what he calls “shotgun meta-genomics of viral communities,” which is the heart of his research. Explaining further, Wommack said, “The reason it is called ‘shotgun’ is that we literally are randomly sampling sequences from viruses in the environment.”

Wommack said a problem with obtaining genetic sequence information is that the process takes a long time when in fact it needs to be as fast and accurate as weather predictions. “What if we could only measure temperature once a week? We really wouldn’t know a lot about how the climate and how weather works,” he said. “But of course, we can measure temperature in incredibly small scales of time. That’s where we need to get in the use of genetic data and environmental science and the Pacific Biosciences instrument gets us a little bit closer to that.”

The machines currently utilized at the center — while they each serve their own function — are slower than the new model, which Wommack said, “Allows you to run a lot of samples quickly.” They also provide shorter snippets of genetic sequence.

Kingham also said that he encouraged “anybody that’s involved in life sciences research to consider using that Pacific Biosciences sequencer because it’s so new, there’s so little known about how it can be utilized, and through the ability to analyze a single molecule of DNA, it has the possibility to change the face of genomics research.”

Kingham went on to say that the machine is “absolutely the cutting edge of DNA sequencing technologies, and UD is really fortunate to have it.”

About the UD Sequencing and Genotyping Center

While Kingham said he is thrilled about the new Pacific Biosciences machine, he is also quick to point out that each of the sequencers has its own relevant application area.

The Sanger machine, explained Kingham, “has been around for 40 years, and will probably be around for another 40 years. The advantage to that technology is it produces very high quality data. The disadvantage to it is that it can be very expensive to generate that data.”

The Illumina instrument, Kingham said, generates a large amount of data very inexpensively, but he added that the data might not be of as high a quality as that produced by the Sanger machine.

As for the Pacific Biosciences sequencer, the long length of the sequencing read, coupled with the ability to analyze a single molecule of DNA, cannot be matched by the other instruments.

For more information on the UD Sequencing and Genotyping Center visit the website.