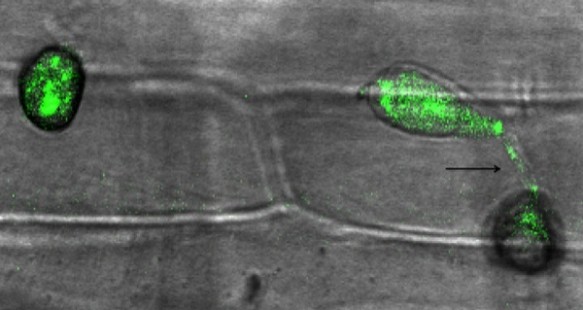 In a “clash of the microbes,” University of Delaware plant scientists are uncovering more clues critical to disarming a fungus that is the number one killer of rice plants.

The findings, published in December in Frontiers in Plant Science and in Current Opinion in Plant Biology, may lead to a more effective control for Magnaporthe oryzae, the fungus that causes rice blast disease.

“Rice is a food the world relies on — it accounts for about one-fifth of all the calories humans consume,” says Bais. “So it’s critical to find ways to reduce the impact of rice blast disease, especially as global population is expected to exceed 9 billion by 2050, and the need for more food increases.”

Previously, Bais and his research team isolated Pseudomonas chlororaphis EA105, a bacterium that lives in the soil around the roots of rice plants and found that this beneficial microbe can trigger a system-wide defense against the rice blast fungus.

Now, they have identified a stress hormone that appears to play a crucial role in increasing the virulence of the fungus.

When little water is available, rice plants make more abscisic acid in their roots. This stress hormone travels up to the plant leaves to close off tiny pores, halting the evaporation of water from the plant to the atmosphere.

Bais and his team have shown that when the rice blast fungus invades a rice plant, an increase in abscisic acid occurs. But rather than boosting the plant’s defense mechanisms, the abscisic acid actually suppresses them, making the pathogen even more potent.

“It’s like a double-edged sword,” Bais says. “Abscisic acid can save the plant during drought. But when a pathogen is present, this same molecule blocks the plant’s innate defense response.”

In studies at the Delaware Biotechnology Institute at UD, Bais and his team treated spores of the rice blast fungus with abscisic acid. In 10 hours, 84 percent of these spores had germinated and formed a specialized infection structure called the appressorium, which acts like a battering ram, exerting pressure on a rice leaf until the fungus punches through the surface.

However, when spores of the fungus were treated with both the beneficial bacterium EA105 and abscisic acid, only about 23 percent of the spores formed this attack machinery.

“The rice blast fungus uses abscisic acid to its own advantage, which is absolutely wild,” Bais says. “People have been struggling to find targets for controlling rice blast, and now we have one, with abscisic acid. It’s one of those classic holy grails because this fungus affects not only rice, but also barley and wheat.”

Although abscisic acid may be responsible for virulence in the rice blast fungus, the molecule itself is not a feasible target for fungicides because of its crucial roles in plants, from seed development to its modulating effect during temperature extremes and high salinity, to its well-studied role in drought tolerance.

However, targeting specific genes in the fungus that biosynthesize abscisic acid could deliver the real knockout punch.

“Plants and their microbial neighbors have this beautifully complex and intricate system of communicating through chemical signals, with each trying to manipulate the situation to maximize their own fitness,” Bais says. “We want to be able to manage some of these interactions, too, to enhance food security.”

The research is supported by the National Science Foundation.