Home > News > From genes to drugs

From genes to drugs 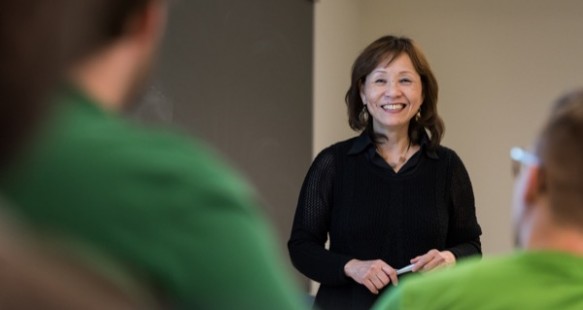 In his 2015 State of the Union address, President Barack Obama announced the launch of the Precision Medicine Initiative, a new research effort to revolutionize how we improve health and treat disease.

“Doctors have always recognized that every patient is unique, and doctors have always tried to tailor their treatments as best they can to individuals,” the president said. “You can match a blood transfusion to a blood type — that was an important discovery. What if matching a cancer cure to our genetic code was just as easy, just as standard?”

Cathy Wu, the Edward G. Jefferson Chair of Bioinformatics and Computational Biology at the University of Delaware, has devoted her career to improving how new scientific data generated by the scientific community is stored, organized, indexed, viewed, and analyzed.

She’s especially intrigued by proteins, which are important players in biological processes and may be the key that opens the precision medicine door.

The first is a $2.8 million renewal grant from the National Institutes of Health (NIH) to further develop the Protein Ontology (PRO), a virtual reference library for proteins developed by Wu and her colleagues.

The NIH PRO grant will allow researchers to capture and accurately represent scientific knowledge for ontology mapping — the process of finding connections between concepts — and semantic integration of gene-disease-drug information.

The ontological structure to connect the vast and growing amount of biomedical knowledge is critical as researchers expect more and more of computers, in terms of not just their ability to store and search data but also their capability to reason and draw inferences.

“This infrastructure will be instrumental in genome-scale knowledge discovery and will aid in improving our understanding of human disease and in identifying potential diagnostic and therapeutic targets,” says Wu, who is also director of the Center for Bioinformatics and Computational Biology at UD.

Wu is also part of a team, led by Georgetown University’s Subha Madhavan, that has received $1.4 million from the NIH Big Data to Knowledge (BD2K) Initiative, which is aimed at capturing the opportunities and challenges facing biomedical researchers in accessing, managing, analyzing, and integrating datasets that are increasingly larger, more diverse, and more complex.

In collaboration with Vijay Shanker, professor in UD’s Department of Computer and Information Sciences, Wu plans to build an innovative software stack called MACE2K (Molecular and Clinical Extraction) to adapt and extend natural language processing tools to automatically retrieve and pre-process targeted therapy information from the scientific literature and from the government’s clinical trials database.

Wu points out that it is not easy to rank cancer drugs for personalized therapy, as there is no clear clinical evidence associating markers with drug response or disease progression, and information is often buried in publications, conference proceedings and clinical trials.

“In this project, the researchers will examine evidence associated with each biomarker and its role in predicting response to therapy,” she says. “This data can then be used to design clinical trials and conduct personalized medicine research.”

Prior to joining UD, Wu was professor of oncology and of biochemistry and molecular biology at the Georgetown University Medical Center. She earned her doctoral degree at Purdue University, has served on several advisory boards for agencies such as the National Institutes of Health and the National Science Foundation, and professional associations such as the Human Proteome Organization and the Association for Computing Machinery.