Home > News > From methanol to butanol

From methanol to butanol 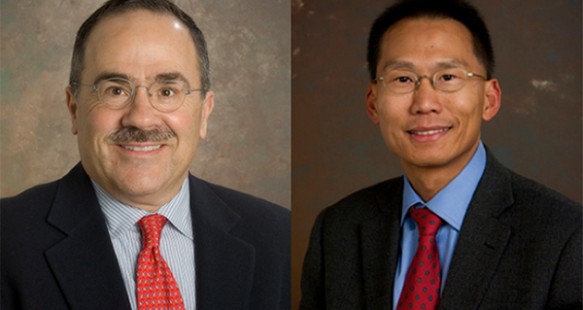 The University of Delaware has been awarded a three-year grant totaling more than $3 million from the Department of Energy’s Advanced Research Projects Agency (ARPA-E) to use an engineered microorganism to produce butanol, a useful transportation fuel, from methanol and carbon dioxide.

The project aims to use methanol as the starting chemical for butanol production.

The work will be led by Terry Papoutsakis at the Delaware Biotechnology Institute, with UD co-investigators Wilfred Chen, Gore Professor of Chemical and Biomolecular Engineering, and Maciek Antoniewicz, DuPont Young Professor, along with professor Mattheos Koffas of Rensselaer Polytechnic Institute.

“This funding supports the very high-risk science needed to develop technology with transformational potential,” says Babatunde Ogunnaike, dean of the College of Engineering. “The project not only aligns with our mission and focus on energy and sustainability, but also sets the stage for opening and exploiting new scientific frontiers in synthetic biology, genomic sciences, protein engineering, and metabolic engineering. Winning this award demonstrates the strength of our faculty and puts UD on equal footing with the best institutions in the country.”

The research is aimed at engineering a synthetic methylotrophic organism that will use new metabolic pathways to convert methanol into butanol while capturing and reusing generated carbon dioxide.

Methylotrophic bacteria are organisms that use one-carbon molecules such as methane or methanol as their sole carbon and energy source for growth.

“These organisms grow aerobically and contain useful metabolic pathways that can be utilized in other organisms,” says Papoutsakis, who is Eugene du Pont Chair of Chemical and Biomolecular Engineering at UD.

“We propose to use metabolic engineering and synthetic biology techniques to transfer the methanol utilization pathway to an organism that is able to grow anaerobically, which will allow this new organism to grow on methanol and use the available energy to produce butanol.”

Butanol has a high energy content, and its chemical and physical properties are compatible with the current gasoline-based technologies for transportation, so it can be readily used in existing vehicles.

In addition to producing butanol, the team proposes to engineer the microorganisms to use carbon dioxide as an additional carbon source together with methanol.

“If successful, this project will enable the commercialization of cutting-edge technology that will transform the energy landscape by converting methane into ready-to-use fuel while also having a positive impact on the environment by reducing carbon dioxide emissions,” says Papoutsakis.

Beyond the transformational practical applications, Chen points out that the project also tackles some longstanding fundamental issues: “Can we activate methane anaerobically and do so efficiently? Can we understand the molecular basis of how some cells carry out a set of primordial reactions that in principle look impossible? What clever tricks has nature devised to do so, and how do we uncover and use these tricks?”

The award to UD was one of 15 “breakthrough” projects totaling $34 million via the REMOTE program (Reducing Emissions using Methanotrophic Organisms for Transportation Energy). REMOTE seeks advanced biocatalyst technologies that can convert natural gas to liquid fuel for transportation.