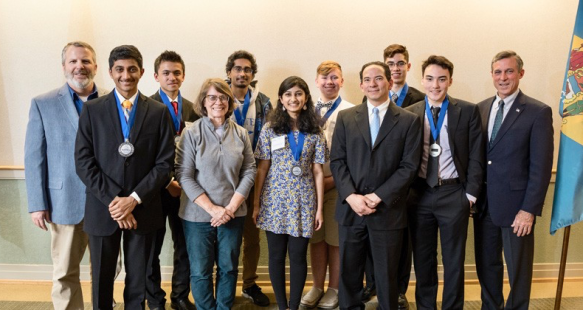 The Delaware Biotechnology Institute, with which the University of Delaware is a partner, hosted a Celebration of Science ceremony on Tuesday, April 24, with Gov. John Carney delivering awards, including for the Delaware BioGENEius Challenge competition.

High school students design and complete independent projects and present their work at county science fairs. Student projects from the county fairs are selected to compete in the local Delaware BioGENEius Challenge.

The winner for the Delaware BioGENEius Challenge was Preeti Krishnamani from the Charter School of Wilmington for her project entitled, “Effects of silicon amendments on the concentration and adsorption properties of iron-oxides in paddy soils.” Krishnamani will represent Delaware at the International BioGENEius competition held in conjunction with the Biotechnology Industry Organization meeting in June in Boston, which is attended by 16,000-plus researchers and business people.

The Delaware Biotechnology Institute is a partnership among government, academia and industry to help establish the state as a center of excellence in biotechnology and the life sciences.

In opening remarks, Carney noted his long involvement with DBI from when it was first proposed as a “virtual academy” more than 15 years ago.

“Science has never been more important than today,” Carney said. Biotechnology, he said, is driving “lots of opportunity for research, discovery and innovation.”

Carney referred to the “staggering legacy of job and wealth creation” that the sciences had long brought to Delaware. He closed by saying he “was excited to be here to celebrate the students, parents, and teachers” that drive the development of young talent in Delaware.

Interim DBI Director and UD Professor John Koh noted that this was the eighth consecutive year that DBI has sponsored and organized the Delaware BioGENEius competition along with financial support from the pharmaceutical company AstraZeneca.

“The start of many Delaware companies came down to people making innovative discoveries through science and these people started out as ambitious high-school just students like those gathered here today,” Koh said.

Koh thanked DBI and UD faculty, staff and students that traveled to science fairs across the state to evaluate projects along with the teachers who organize them and mentor the students as they pursue their projects. He highlighted the efforts of Mary Boggs and Townsend Fellow Colleen Pike who were heavily involved in these efforts as well as hosting tours of DBI and Sussex Science Night that expose hundreds of K-12 students to biotechnology research and, most importantly, the volunteers and staff who carry it out throughout the year.

Local support for the 2018 Delaware BioGENEius Challenge was provided by AstraZeneca and the Delaware Biotechnology Institute.

The Delaware Biotechnology Institute is a partnership among government, academia and industry to help establish the First State as a center of excellence in biotechnology and the life sciences.

DBI promotes research, education and technology transfer for biotechnology applications to the benefit of the environment, agriculture and human health.