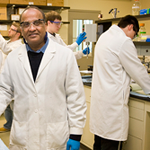 Researchers at Temple University and the University of Delaware have published a study in the Journal of Biological Chemistry that sheds new light on the clotting effects of a drug that is being tested as a potential treatment for hemophilia.

Referred to as the “royal disease” for its presence in Europe’s royal families in the 19th and 20th centuries, a genetic legacy traced to Queen Victoria, hemophilia is a rare disorder in which the blood’s ability to clot is impaired. The disease, which most often is transmitted genetically from carrier mothers to their sons, affects one in every 5,000 males born today, according to the National Institutes of Health. It also may occur in women, although much more rarely.

Under normal circumstances, when a blood vessel is cut, platelets arrive in seconds and begin sticking together to stop the bleeding. The surface of the platelets supports other proteins called “clotting factors,” which bind with the platelets to form a tight clot. Thirteen clotting factors are known and are named by Roman numerals, from Factor I to Factor XIII.

“When a blood vessel is injured in a person with hemophilia, the platelets, the ‘policemen’ that are the first to respond, are fine, but some of the clotting factors are either missing or mutated,” explains Ulhas Naik, professor of biological sciences at UD and a co-author of the study. “Without these clotting factors, the platelets can still form a plug to stop the bleeding, but it takes longer to build and is not as strong.”

In their recent study, Naik, who directs the Delaware Cardiovascular Research Center based at UD, and Satya Kunapuli, director of Temple’s Sol Sherry Thrombosis Research Center, wanted to determine how the drug Fucoidan affects blood platelets. This drug, a sulfated polysaccharide, a type of carbohydrate derived from the brown seaweed Fucus vesiculosis, has shown promise in decreasing bleeding and clotting time for people with hemophilia and is now in clinical trials.

Through their laboratory experiments using a mouse model, and with the aid of colleague Steve Watson, professor and head of the Platelet Group at the University of Birmingham in the United Kingdom, the scientists confirmed that Fucoidan works by activating platelets versus replacing or amping up a specific clotting factor.

The researchers discovered the receptor on the platelets to which the drug binds, known as C-type lectin-like receptor 2 (CLEC-2), as well as its signaling pathway. They also found that snake venom activates this receptor. A bite from a venomous snake enlists platelets to form blood clots, which help incapacitate its prey.

“Fucoidan enhances blood clotting in people with hemophilia, but in a normal person, this could be a problem,” Naik says. “Thus, it’s important in clinical trials that this drug not be given to control subjects because, for them, it may cause unwanted platelet activation and, thus, clot formation.”

Naik and Kunapuli have been collaborating on cardiovascular studies for the last few years, making reciprocal laboratory visits, phone and Skype calls to monitor progress and to discuss new research ideas. In this latest study, Kunapuli’s team at Temple, especially graduate student Bhanu Kumar Manne, conducted most of the laboratory experiments, and Naik at UD contributed to the analysis and interpretation of the research findings.

Today, more than 400,000 people worldwide are estimated to have hemophilia.

World Hemophilia Day is April 17. The event, held each year on that day, is designed to increase awareness of hemophilia and other inherited bleeding disorders. Queen Victoria passed the genetic mutation for hemophilia to two of her daughters, eventually affecting the royal families of Spain and Germany and Russia's last imperial family. This photograph, dated circa 1845, shows Queen Victoria and her eldest daughter, Victoria (who apparently was not a carrier of the disease).