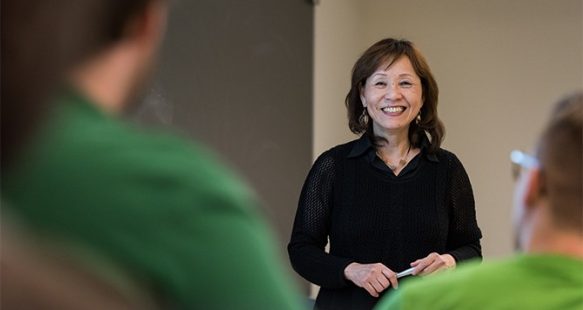 The University of Delaware’s Cathy Wu has been named a 2016 Highly Cited Researcher by Thomson Reuters.

The designation, which she also received in 2014 and 2015, places her among the top one percent of researchers most cited for their subject field and year of publication in Reuters’ academic citation indexing and search service, Web of Knowledge.

“This is indeed a great honor and an acknowledgement of the impact of our cross-disciplinary team science — research excellence that has been achieved by our entire team of faculty, students and scientific staff at the University of Delaware and our collaborators at partner institutions nationally and internationally,” Wu said.

A pioneer in bioinformatics and computational biology, Wu has led or co-led several large multi-institutional consortium grant projects funded by the National Institutes of Health, the National Science Foundation and the Department of Energy.

In addition, the international UniProt Consortium project, co-founded by Wu in 2002, has become a central hub for protein sequence and function, now receiving about 5 million page views per month from over 500,000 unique sites by researchers worldwide.

Wu has published some 250 peer-reviewed papers, with over 22,000 citations. Her work has an h-index of 51, and an i10-index of 133 based on Google Scholar. Her research encompasses genomic and protein annotation, biomedical text mining and ontology, systems biology, big data analytics, and translational bioinformatics.

Wu earned master’s and doctoral degrees in plant pathology at Purdue University and later completed a master’s in computer science at the University of Texas–Tyler. She joined the UD faculty in 2009.