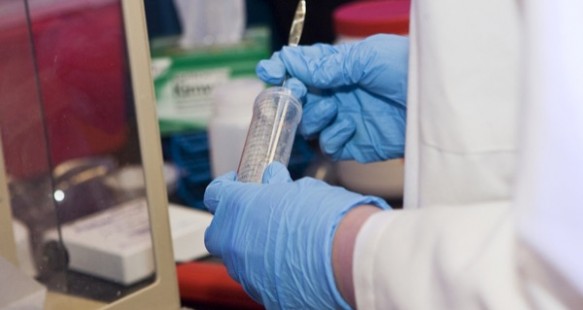 The report, America’s Knowledge Economy: A State-by-State Review, issued by the Council of State Governments and the academic publisher Elsevier, assesses research output and impact from 2004 to 2013. The scholarly research publications produced in each state are a key barometer for innovation.

Delaware’s performance was nearly twice the national average and was exceeded only by Massachusetts, whose researchers produced 12.7 publications per million dollars in R&D expenditures.

Delaware generated 3.24 research publications per 1,000 residents in 2013, ranking the state sixth, ahead of New York, Pennsylvania, Colorado and Minnesota, among the top ten nationally.

In fiscal year 2013, the total economic impact of the UD community and companies assisted by the University was $6.2 billion.

“These findings are a testament to the excellence and impact of University of Delaware faculty members and to their strong collaborations with colleagues at other academic institutions, in industry and in government labs,” said Charlie Riordan, deputy provost for research and scholarship. “As highlighted in UD’s draft strategic plan, Delaware Will Shine, partnerships are essential for a strong research enterprise and to our contributions in solving real-world problems, both locally and globally.”

In an analysis of where states have a comparative advantage in research, the report ranks Delaware 10th among all states in terms of research impact in the agricultural and biological sciences. Delaware’s publications were cited 18 percent more than the U.S. average for these fields.

“Knowledge is power,” said Wu, who is the Edward G. Jefferson Chair of Bioinformatics and Computational Biology at UD. “Scientific publication is the best way for us to disseminate information and share knowledge with the research and user communities. With scientific literature now readily available in digital forms, and increasingly in open access journals, such information and knowledge are also being captured in numerous web resources using cutting-edge text-mining technologies with far-reaching, cascading impact.”

The report also reveals that Delaware researchers’ publications were cited 52 percent more than the global average in the past decade.

Green pointed out that scientists rely on published research to build on each other’s work and to compare results and interpretations. She holds the Crawford H. Greenewalt Chair in the Department of Plant and Soil Sciences and also is a professor in the School of Marine Science and Policy.

“This allows the scientific enterprise to be self-checking and for old results to further enhance progress when considered in the context of new discoveries,” Green said. “For university faculty, it is also critical to our teaching mission that our students and postdocs learn to effectively convey their work to the scientific community through peer-reviewed publications.”

“Publications represent the successful end product of my research activities, a way to communicate the findings we have made, and our ideas and current thinking about subjects of interest to us,” Meyers said.

According to the report, in 2013, the United States published more than 536,000 peer-reviewed research publications.