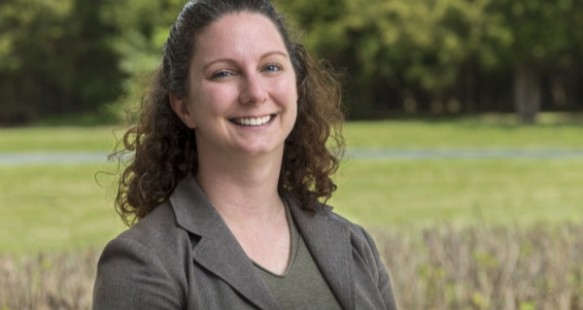 Microbes are living more than 500 feet beneath the seafloor in 5 million-year-old sediment, according to new findings by researchers at the University of Delaware and Woods Hole Oceanographic Institution (WHOI).

Genetic material in mud from the bottom of the ocean — called the deep biosphere —revealed an ecosystem of active bacteria, fungi and other microscopic organisms at depths deeper than a skyscraper is high. The findings were published in Nature on June 12.

“This type of examination shows active cells,” said co-author Jennifer F. Biddle, assistant professor of marine biosciences in UD’s College of Earth, Ocean, and Environment. “We knew that all of these cells were buried, but we didn’t know if they were doing anything.”

In fact, the microbes are reproducing, digesting food and even moving around despite the extreme conditions found there: little to no oxygen, heavy pressure and minimal nutrient sources. The organisms could shed light on how carbon and other elements circulate in the environment, the scientists reported.

The researchers analyzed messenger RNA (mRNA) in sediment from different depths collected off the coast of Peru in 2002 during Leg 201 of the Ocean Drilling Program. This first glimpse into the workings of the heretofore hidden ecosystem was made possible by the first successful extraction of total mRNA, or the “metatranscriptome,” from the deep biosphere.

Messenger RNA is highly sought-after by microbial ecologists because its presence indicates that the cells that made it are alive and because it carries the instructions for the proteins the cells are making. But because the metabolic rates in the deep biosphere are very low and mRNA is present in small amounts, extracting enough of it to analyze from deep sediments had been thought by many scientists to be impossible.

“It’s not easy,” said lead author William Orsi, a postdoctoral researcher advised by Biddle and WHOI’s Virginia Edgcomb. “There’s a certain amount of banging your head against the wall before it works.”

The genetic sequencing was performed at the Delaware Biotechnology Institute, generating more than a billion bases of information. UD’s Glenn Christman, who received a master’s degree in marine biosciences and works in Biddle’s lab as a bioinformatician, created new computer programs to help examine the immense amount of data.

Other researchers previously suggested that cells in the deep biosphere were buried many years ago and continued to survive by essentially repairing themselves. The new findings show, however, that these cells are able to divide and create new cells.

“It’s the first time it’s been seen,” Biddle said, adding that researchers do not know how long it takes for a cell to divide, but it could be on a geologic timescale of thousands of years.

“It’s been theorized that much of the energy that microbes get in this environment comes from sulfate reduction,” said Orsi. “Basically, instead of breathing with oxygen, they ‘breathe’ with sulfate.”

Until now, models of microbial activity in deep sediments have included sulfate reduction but have not included significant use of nitrate. The current research found comparable numbers of mRNAs involved in nitrate reduction and sulfate reduction, suggesting that both processes are important in the deep biosphere community.

The researchers also found evidence that cells in the deep biosphere are eating amino acids, which are a rich source of carbon and nitrogen and can only come from other living (or recently deceased) organisms.

They think those dead or dying cells are native to the deep biosphere rather than remnants that drifted down through the water because most of the dead material that reaches the seafloor from above is rapidly eaten. Deeper than a few centimeters down, most of the amino acids come from cells that lived and died there.

The study also showed that these deep biosphere microbes can move, which was previously in question. Genetic material indicated that some of the cells have flagella, or small tails that can propel them forward. Other cells produced mRNAs related to gliding and twitching. The ability to move was linked to how porous the sediment was.

“It’s reminiscent of that line from Jurassic Park, ‘Life finds a way,’” Biddle said. “If there’s space to move, they move.”

Finding life in the deep biosphere could refine understanding how carbon moves through the environment. Longtime global models show carbon sinking into ocean sediment, getting buried deeper and deeper and eventually getting released from within Earth’s crust through a volcano.

“But there’s something happening to it on the way down,” Biddle said. “Models suggest that activity in the subsurface is not that important, but we’d like to revisit that with this new information.”

Another reason could be to explore for new pharmaceutical ingredients. The researchers found antibiotic defense mechanisms showing in the RNA data, possibly representing a “seed bank” for medical advances in antibiotics, antifungals and immunosuppressants.

Now that a new approach to analyzing the mRNA has been developed, Biddle is interested in studying other sites beyond the Peru Margin, where the water depth is about 150 meters and there are high sedimentation rates. The activity and depth of the water above the seafloor may impact the microbial ecosystems that exist below.

“This is just this one site in one place, and there’s still the rest of the world to go explore,” Biddle said. “This kind of data is going to be possible to get from other areas, and this should hopefully be the groundwork for it.”

The research was funded by grants from the National Science Foundation and the Center for Dark Energy Biosphere Investigations.