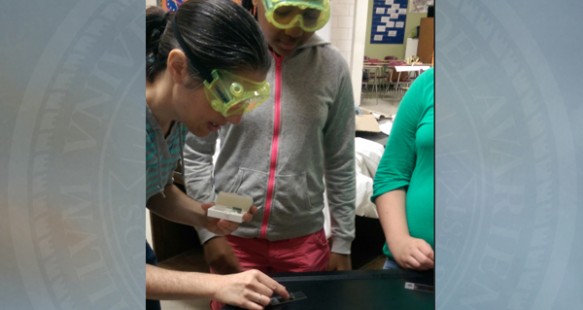 Anyone can be a scientist, science can be lots of fun and — to the surprise and delight of most of the children who participated in the 2014 University of Delaware Marvelous Microbes Camp — science can be easy.

Those were the key messages that Emily Sklar, a master’s degree student in UD’s College of Education and Human Development, hoped to instill in the youngsters who participated in the camp, which was run in cooperation with 4-H through a grant from the National Science Foundation.

Aimed at children ages 5-13, Marvelous Microbes took place in all three counties, with the New Castle County camp taking place the week of July 14 at Gauger-Cobbs Middle School and the southern Delaware camps taking place concurrently the week of July 21 at Mifflin Meadows in Kent County and the Hickory Hill Community Center in Sussex County.

The camp served many at-risk children, who Sklar said can sometimes find themselves falling behind during the school year.

Sklar noted that doing something as simple as offering up words of encouragement worked wonders for the students.

“If we come over and say, ‘Wow, you’re a really good scientist’ or ‘You’re doing a great job on that experiment,’ and you see this light bulb turn on with them thinking, ‘Oh, maybe I am good at this. Maybe I’m not a bad kid, maybe science is something for me.’”

Sklar served as the lead teacher for the camp and created the camp curriculum after being selected by Janine Sherrier, professor in the Department of Plant and Soil Sciences in UD’s College of Agriculture and Natural Resources.

Sklar said the campers do everything ranging from making bread — to show how bread with yeast rises and bread without yeast doesn’t — to completing tasks as difficult as a Gram stain, a method of differentiating bacterial species, which she said is an Advanced Placement level high school experiment.

With activities like bread making, Sklar and the teachers also got to teach the campers life skills. “They got to learn how to measure and also, in talking about microbes, they learned the importance of washing their hands and general kitchen safety. We’re teaching them a lot of other things, too, it’s not just science,” said Sklar.

One of the main goals of the camp was to show that anybody, regardless of age, race or gender, has the ability to be a scientist.

Another teaching tool the camp incorporated this year was teaming with the ArtsBridge Program to help the students think outside the box when it comes to learning science.

Sklar said the ArtsBridge teachers instructed the campers in dance movement, music vocabulary, how to read music, and tone and pitch in the context of a content area, in this case science.

One of the highlights of the camp was when a group of campers traveled to UD’s Delaware Biotechnology Institute (DBI) where they got to see the room known as “The Cave,” a visualization studio with a giant screen that displays 3D images.

The campers got to see images of the microbes that were discussed in camp sessions, and also of lungs as they took a virtual trip down the esophagus and through the bronchial tubes.

Sklar said many physicians and researchers use The Cave for access to leading edge technology that can help them better understand what is going on in the human body. “It’s really cool and the kids really enjoyed that,” she said.

And of course, using the tools is always fun. “They also got to use some of DBI’s high-powered microscopes and look at different images and touch some incredible machines,” said Sklar.

As for her personal favorite part of the camp, Sklar said that it’s a natural blending of two of her favorite things: teaching and science.

“One of the reasons I went into teaching science is my love for biology and my love for sharing knowledge with others, and I love seeing other people get excited about science, especially kids. Teaching them that it’s not all just sitting in a lab mixing chemicals and it’s fun, it can be easy — it can also be really, really hard — but it can be easy.

“And I’ll never forget one of the students looked at me and said, ‘Science in school is boring, but you guys make it so easy and fun.’”

Support for the camp was provided through National Science Foundation grant NSF-1127155, which was awarded to Sherrier. It is related to a larger NSF-funded science project on plant genomes and microbes.