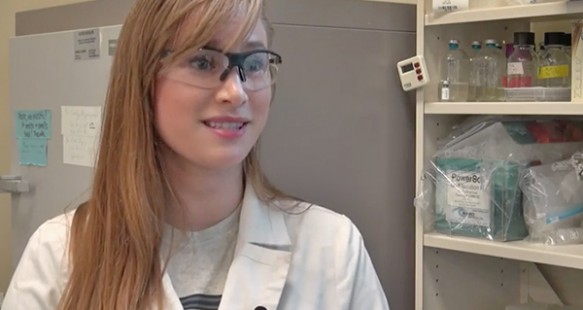 Alaskan tundra soils are estimated to be one of the most significant reserves worldwide of soil organic carbon (SOC), or carbon associated with organic material like decomposed organisms. The microbes that live in the tundra naturally break down this SOC, but changing climate and warming temperatures may affect the rate at which this carbon is released into the atmosphere through microbial activity.

“We want to understand what species are involved in the community, and how nitrogen enrichment, which is representative of a warming environment, plays a role in the changing community,” said Bennett.

Identifying and understanding microbial communities and their role in SOC release may reveal implications locally for soil health, and globally for climate change.

The road to research

Under the direction of CEOE marine biosciences professor Thomas Hanson, Bennett isolates the bacteria from soil samples by mixing samples with solutions and using micropipettes to extract specimens. She then uses genetic identification techniques to identify the types of bacteria found in the tundra samples.

From the animated way Bennett describes micropipettes and petri dishes, it’s evident that she is in her element studying microbial communities. However, her path to becoming an experienced researcher in microbiology wasn’t always so clear cut.

Bennett began her academic career at Delaware Technical Community College. Though coursework helped her realize a love of hard sciences, she truly found her passion for research when Virginia Balke, professor of biology and biotechnology at Delaware Tech, introduced an opportunity for undergraduate students to work in her laboratory, studying microbes in the genus Streptomyces.

“Dr. Balke said they were starting up this undergraduate research program working with microbes and antibiotic production. I was very much the overachiever, so I was like, ‘I’ll do that!’” Bennett said with a laugh.

Through collaborations between the labs of Hanson and Balke labs, Bennett worked to improve isolation and DNA amplification techniques.

She would later recall that working with Hanson and Balke to understand microbes reshaped the way she understood her own academic and career path.

“First I thought I wanted to do agriculture, and then chemistry, but through research, I found that my interests were really in microbiology,” she said.

From Delaware Tech to UD

Bennett was awarded a Summer Scholars internship supported by the Experimental Program to Stimulate Competitive Research (EPSCoR) to work in Hanson’s lab during summer 2013. That fall, she continued to work in Hanson’s lab through funding from a National Science Foundation Advanced Technological Education grant awarded to Delaware Tech, where she remained a student.

She brought the molecular techniques she honed at UD back with her to Delaware Tech, introducing them to other students in the labs there. According to Balke, Delaware Tech students continue to use the techniques that Bennett taught them in ongoing microbial research.

“Alexa was a pioneer on a number of fronts,” said Balke of Bennett’s time in her lab. “She showed great perseverance and independence in her lab work, and I look forward to seeing how she carries that work ethic into her future career.”

Bennett decided to further her education through a bachelor’s degree at UD, after completing her associate degree at Delaware Tech. Through conversations with Hanson, she decided that the CEOE marine sciences program was the best fit for her personal microbiology interests. She transferred into the program as a junior in spring 2014.

Now a UD senior, Bennett said getting involved with undergraduate research early played a key role in unlocking her academic direction. It’s an experience she encourages all students to seek, even if they aren’t sure of their career path.

“You don’t have to know what you want to do,” Bennett said. “Entering into a lab gives you the opportunity to determine what components of research you like, and what components you don’t like.”

While Bennett’s academic path has had some atypical twists and turns, she says she feels grateful to have come into contact with so many caring and supportive faculty and staff, and to have found a home in CEOE. She expressed that the same is possible for any student, no matter how uncertain they feel starting out.

“Even if the program doesn’t have the title you had in mind, be open and don’t be afraid to ask questions. Ultimately, it may be a better fit,” Bennett continued.

“Alexa’s experience shows that students can connect to UD through a number of different paths, some more traditional than others,” explained Frank Newton, CEOE assistant dean for student services. “Our collaborations with Delaware Tech and other institutions, through connected degree programs, research and other opportunities, play a crucial role in enriching the lives of our students and the University community.”