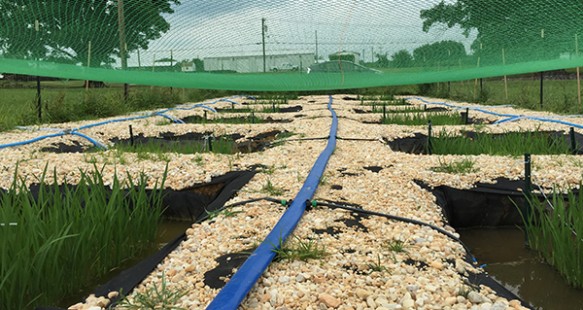 A new study by University of Delaware researchers considers how adding silica-rich rice residue — such as husks, straw and the ash of those materials — to improve crop yields and decrease arsenic uptake may affect the soils in which rice plants are grown.

The results of the study were recently published in Plant and Soil, an international journal on plant-soil relationships.

The study was carried out by Evanise Penido, a visiting student from the Federal University of Lavras (UFLA) in Brazil.

Penido worked on the project, led by Angelia Seyfferth, assistant professor in the Department of Plant and Soil Sciences, in collaboration with Tom Hanson, professor in the School of Marine Science and Policy and associate director of the marine biosciences program, and Alexa Bennett, a graduate student in the College of Earth, Ocean, and Environment.

Seyfferth said the current practice of removing silica-rich rice residues and not incorporating them into soil is a leading cause of yield declines and the susceptibility of rice to abiotic and biotic stress.

“Rice is a very efficient silicon accumulator. It’s able to pull silicon out of soil, and the rice straw and the rice husk have a lot of silicon stored in the tissues,” Seyfferth said. “If we incorporate those residues back into soil and get more into a holistic farming approach – kind of like with organic residues – we could improve the health of the soil and provide a source of nutrients for plant-uptake.”

Because farmers in developing countries need a low cost solution to lower arsenic uptake in rice, the leftover material could prove to be a viable option, something that became apparent to Seyfferth when she conducted work in Cambodia.

“These residues are removed from the field and just piled up, but if we were able to take these materials and put them back into soil, they might provide a source of silicon for the plants that would be something that farmers in developing countries would easily have access to and could utilize,” said Seyfferth.

Penido added that most farmers in South and Southeast Asia have small-scale operations and cannot afford regular applications of silicon fertilizers because of the high costs and limited availability.

“A low cost solution, such as applying rice residues into rice paddies, is important to both the environment and human health. We are recycling wastes which can be used by small-holder farmers in developing countries, providing enough silicon to decrease arsenic uptake by rice,” said Penido.

In addition to that rigidity, the silicon also directly competes with the predominant form of arsenic — the reduced form of arsenic called arsenite — that is present in flooded rice paddy soils.

In addition to decreasing arsenic uptake in the rice, silicon also helps improve crop yields by making the plant more rigid, stronger and healthier. When the rice plants have more silicon, they use less water and employ water and nutrients more efficiently.

The researchers were also interested in what happens when the residue is added back to the soil to see how they impacted the pH, the silicon and arsenic availability, and also the dissolved methane in the soils.

“What we don’t want to do is add something that would increase methane emissions,” said Seyfferth.

Penido explained that to conduct the research, they collected soil from UD’s College of Agriculture and Natural Resources (CANR) farm and had three kilograms of soil added in each pot.

“Different particle sizes of fresh straw, fresh husk and the ash of straw or husk were incorporated into soil. Pots were then flooded to five centimeters above the soil surface and kept flooded during the entire eight-week experiment. Pore water samples were obtained every week, for a total of eight weeks and analyzed,” Penido said.

The study showed that incorporating the straw has drawbacks because, while it has a lot of silicon, it also leads to more methane production and more arsenic release.

Husk addition, on the other hand, is very beneficial because it provides the most silicon of all the residues studied, doesn’t release much arsenic and has a low impact on methane emissions.

“There were a lot of benefits from incorporating the husk,” said Seyfferth.

As for her time at UD, Penido, who is currently working toward a master’s degree in chemistry at UFLA, said, “As an international student I just loved being a Blue Hen. UD for me was home away from home. I made really good friends, studied a lot, made the fall dean’s list, and had a lot of support. Dr. Tom Sims, Maria Pautler and Ashley Fry were of extreme importance to make my dream of studying at UD true. Ashley was the best adviser I could have asked for. I am thankful for everyone from CANR who welcomed me. I loved living in the dorms, the social events and clubs, the UDairy Creamery, Ag Day and the good UD atmosphere – everyone is so happy.”

Of working with Seyfferth, Penido said, “She was always willing to teach and help me, not just with the project but also with the courses I was taking. She always showed me kindness and respect. She was my adviser for my senior thesis and was very willing to help me prepare for research presentations. I want to continue our studies in the near future.”

Seyfferth remains in touch with Penido, who she said was great to work with on the project.

“She was so engaged and outgoing and I think it was a testament to the quality of students that UFLA has and brings here,” said Seyfferth, who added that she now has another UFLA student in her lab who is in a doctoral program.

“It’s a wonderful opportunity for us to get high quality students and also to have this exchange. I think it’s opened the doors for a lot of collaboration,” said Seyfferth.

The research was funded by a National Science Foundation (NSF) Early Career Development Award that Seyfferth received, as well as an NSF research starter grant and the UD Research Foundation.