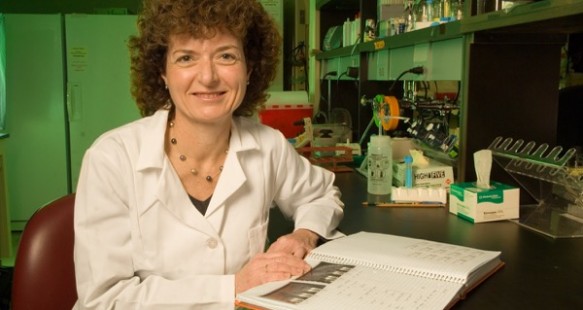 The University of Delaware’s Pamela Green is part of an international consortium of researchers from 35 laboratories that have published the genome of the seagrass Zostera marina. It is believed to be the first marine angiosperm to be fully sequenced.

The study, titled “The Genome of the Seagrass Zostera marina Reveals Angiosperm Adaptation to the Sea,” was published in the scientific journal Nature and is featured on the cover of the print edition.

Seagrasses evolved from marine algae, the ancestors of land plants, and are the only flowering plants to have returned to the sea. In the marine environment, they provide a habitat and nursery ground for young fish and other marine organisms. Like their terrestrial counterparts, seagrasses are comprised of leaves, root systems, conductive tissue, flowers and seeds.

Seagrass meadows are part of soft-sediment, coastal ecosystems of all continents except Antarctica. They serve an important role in protecting the coastline from erosion and maintaining water clarity, while acting as a carbon sink by absorbing carbon dioxide from the atmosphere. Yet, seagrass meadows are threatened worldwide, and to date, many initiatives to restore degraded seagrass meadows have had limited success.

According to the researchers, a fully sequenced Z. marina genome is a valuable resource that can markedly advance and support a wide range of research, from work aimed at understanding the adaptation of marine ecosystems under climate warming and its role in carbon sequestration to unraveling the mechanisms of salt tolerance that may further inform assisted breeding of crop plants.

Green’s contribution to the study involved investigating microRNAs (miRNAs) of Z. marina, in collaboration with Emanuele De Paoli, an assistant professor of genetics at University of Udine (Italy) and former postdoctoral researcher at UD.

MicroRNAs are a class of regulatory RNAs, molecules found in virtually all plants and animals that regulate gene expression and serve functions in numerous cellular pathways.

Although miRNAs can be studied by deeply sequencing the small RNAs themselves, as De Paoli, Green and collaborators had already done, a genome sequence provides an extremely valuable advantage, according to Green.

The Z. marina genome made it easier to distinguish bona fide miRNAs from other classes of small RNAs because it allowed for identification and characterization of miRNA-encoding genes, both those that were expected and those previously unknown. This new analysis clearly demonstrated that Z. marina lacks several miRNA genes that arose in related terrestrial species.

In contrast, it retained the oldest known miRNA specific to the important group of monocot plants to which Z. marina and several crop species, such as cereals, belong.

“Zostera marina or its direct ancestors appeared in evolution right after the entire monocot branch originated. Inspecting its genome can reveal genetic features, like the birth of a miRNA gene, which arose approximately around that important period of evolution and could have played a crucial role in determining biological innovation. We have identified one such event and it is very rewarding,” said De Paoli, who is an expert in the computational analysis of miRNA genes, epigenetics, genome structure and evolution using next generation sequencing data.

“This study also opened new doors for future study by identifying the target genes which miRNAs could regulate. The hints are that some Z. marina miRNA-target associations could reveal novel regulatory mechanisms involved in development and other fundamental processes,” said Green, the Unidel Crawford H. Greenewalt Professor of Plant and Soil Sciences.

Green is also a member of the faculty in the School of Marine Science and Policy in the College of Earth, Ocean, and Environment at UD, and holds joint appointments in the departments of Biological Sciences and Chemistry and Biochemistry.

“It was wonderful to participate in this consortium which gleaned many exciting insights from the first marine flowering plant to have its genome sequenced,” she said.

Research in Green’s laboratory at the Delaware Biotechnology Institute (DBI) focuses on post-transcriptional mechanisms that regulate the expression of genes in plants, marine organisms and human cells. She is particularly interested in the fate of mRNA molecules, which play a pivotal role in the gene expression process.

Zostera marina, also called eelgrass, is the most widely distributed seagrass throughout the northern hemisphere of the Pacific and Atlantic, ranging from the warm waters of southern Portugal to the frigid temperatures of northern Norway. Eelgrass has adapted to the salty conditions of seawater, making it a useful vehicle for studying the relationship between the complex gene networks affecting temperature and salt tolerance.

The consortium researchers, led by Jeanine Olsen of the University of Groningen (Netherlands), first set out to produce and annotate a high quality genome sequence in order to better understand the genetic networks and the interaction of ecology and evolution in these plants.

What they learned was that in its evolution from a terrestrial to marine plant — its “return to the sea” — eelgrass made a host of unique adaptations.

For example, eelgrass no longer has stomata, microscopic pores that land plants use to breath, or any of the genes involved in development of the specialized cells of these structures. This means that Z. marina is bound to the sea. Additionally, the cell walls of eelgrass no longer resemble normal plant cell walls, rather, they are more like that of seaweeds or algae.

Plant signaling and defense are also different. Genes in land plants that produce volatile compounds have also disappeared from the Z. marina genome. Pollination of the seagrass flower occurs entirely underwater, where there are no insects to help. As for predators, however, there are still plenty of small grazers that scrape algae off the leaves.

An overarching question for the international research team is how fast eelgrass can adapt to rapid climate change. The fact that Z. marina grows along the coastline from Portugal to Scandinavia is being used as a natural experiment to investigate adaptation to warmer or colder water, as well as to salinity, ocean acidification and light.

Additionally, learning more about eco-evolutionary interactions is relevant to the development of genomics-based, early-warning indicators that may foreshadow seagrass ecosystem shifts and tipping points, the researchers said.

Adapted with permission by Karen B. Roberts

Photo of meadow in Archipelago Sea, Finland, by C. Boström

Photo of meadow in Balsfjord, northern Norway, by Frithjof Moy