Home > News > Secrets in the soil

Secrets in the soil 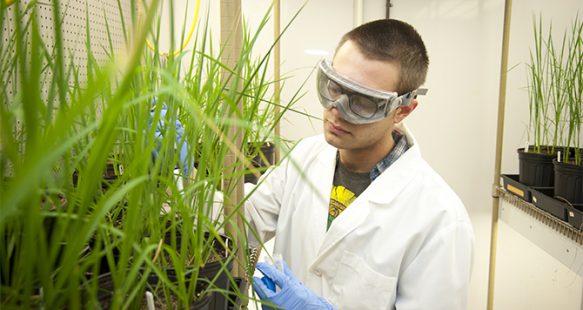 University of Delaware student Jonathon Cottone knows the tell-tale signs that rice plants are getting sick: the yellowing leaves, the faint football-shaped lesions.

Cottone, a junior from Wilmington, Delaware, is working with Harsh Bais, associate professor of plant and soil sciences at UD, on research to help this globally important grain cope with increasing stress.

Recently, the UD team found that when rice plants are subjected to multiple threats — including increasing concentrations of poisonous arsenic in water and soil, an urgent concern in Southeast Asia, plus a fungal disease called rice blast — the plants aren’t necessarily goners.

Rather, the UD researchers have shown for the first time that a combination of beneficial soil microbes can be applied to the infected plants to boost their natural defenses, combating both problems.

The findings, published in Frontiers in Plant Science, provide new evidence about the potential benefit of “biostacking” — putting multiple microbes together to protect plants from stress. The research also lends further support for a natural, chemical-free approach to protecting a crop that over half the world’s population depends on for food.

A ‘health cocktail’ for rice plants

“We wanted to see if we could use a combinatorial approach — a ‘cocktail’ of organisms — that would help rice plants with two simultaneous stresses attacking them,” Bais said, from his laboratory at the Delaware Biotechnology Institute.

In addition to Bais and Cottone, the team included Venkatachalam Lakshmanan, a former postdoctoral researcher at UD who is now working at the Oklahoma-based Samuel Roberts Noble Foundation.

Previously, the UD team identified two species of bacteria that come to the rescue of rice plants when the plants are under attack. The two microbes naturally inhabit the rhizosphere, the soil around the plant roots.

Pseudomonas chlororaphis EA105 can trigger a system-wide defense against the rice blast fungus, which destroys enough rice to feed an estimated 60 million people each year.

EA105 inhibits formation of the fungus’s attack machinery, the appressoria, which acts like a battering ram, putting pressure on a plant leaf until it is punctured.

A second microbe, EA106, mobilizes an iron plaque, or shield, to begin accumulating on the roots of rice plants when arsenic is present, effectively blocking uptake of the poison.

“What’s happening in Southeast Asia from high levels of arsenic in water and soil has been called the largest mass poisoning in history,” Bais said. “The EA106 microbe has multiple benefits. The iron shield it deploys blocks the arsenic. This iron, absorbed into the rice grain, could help address another big health problem in many developing countries — iron deficiency.”

In their laboratory studies with hydroponically grown rice plants, the UD team treated plants with arsenic, then treated them with EA105 and EA106. Seven days later, they infected the same plants with blast disease. Along the way, they examined the overall genetic responses when arsenic, beneficial bacteria, and fungal disease were incorporated. The resulting data clearly showed that the microbial cocktail could bolster plant defenses against both arsenic and rice blast disease.

But there were some surprises. For example, the researchers thought if arsenic was taken up by rice plants, that poison might be detrimental to the blast fungus. But that was not the case.

The ability of the blast fungus to tolerate arsenic is a direct story of evolution, according to Bais.

The fungus has become more and more resistant to arsenic over time.

“To prevent arsenic toxicity, we think the fungus put the arsenic in ‘a safehouse’ — storing it in its vacuole — before the toxin gets loaded to the grain,” explained Bais.

So how could beneficial microbes such as EA105 and EA106 be applied to protect rice plants? A seed treatment, or microbial coating, would be the most practical route in formulating an economical, effective product, Bais said.

Next semester, Bais will travel home to India while on sabbatical leave to give talks at universities, collaborate on research and meet with people who do work in the field.

“A real opportunity for India’s next generation of sustainable agriculture will be this area of plant probiotics, using microbes that naturally occur in the soil to help plants,” Bais said.

Meanwhile, Cottone, who recently was named a DENIN Environmental Scholar at UD, will continue his research in the Bais lab, skyping with Bais while he is away.

Ironically, Cottone didn’t know a lot about plants until he took Bais’s introductory botany course last year. Then a whole new world opened up to him, and he’s now decided to pursue a double major in plant science and animal science.

“This work has a huge humanitarian bent in that the majority of countries affected by arsenic poisoning are developing countries,” Cottone said. “So this work could really help a lot of people who really are not in a position to help themselves.”

“Jonathon is doing a fantastic job,” Bais said. “He puts in long hours. He’s mastered how to grow rice and manages the entire greenhouse now. He’s already co-authored a scientific paper as an undergrad.”

And he’s got lots of room to flex his research muscles. The complex relationships between plants and the microorganisms living with them, their “microbiome,” provide countless avenues to explore in the quest to improve plant health.

“Plants are exposed to multiple stresses these days, many driven by changing climate. Plants are just confused. They don’t know what to do,” Bais said. “We’re trying to help them cope.”

Jonathon Cottone, a UD junior majoring in animal and plant sciences, is working with rice plants, studying ways to help them resist arsenic while also increasing their nutritional value.