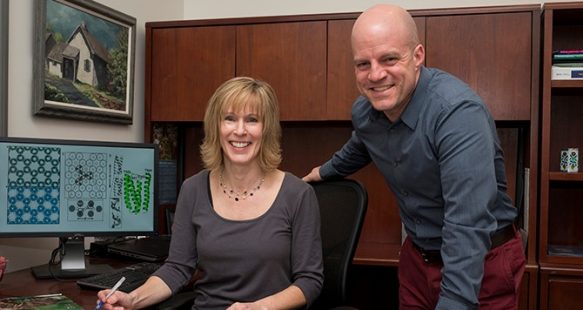 For decades, materials scientists have taken lessons from the mother of all material designers — nature.

Living organisms use self-assembly processes to form large structures from smaller molecules, such as the formation of a cell membrane from fats or tissues from proteins. Understanding the mechanisms of these natural self-assembly processes is enabling scientists to design new materials for a broad range of applications from electronics to regenerative medicine.

“Basically what we’re doing is using peptides and proteins — the same molecular tools that build tissues in our bodies — to make never-before-seen nanostructures,” says Darrin Pochan, professor in the Department of Materials Science and Engineering at the University of Delaware.

But the process of building a new material from self assembly can involve a lot of trial and error. Scientists often have to test thousands of molecules to achieve the properties and functionality they’re looking for in a particular application.

Kristi Kiick, also a professor of materials science at UD, explains that control of the surfaces of folded peptides, which are biologically occurring short chains of amino acids, offers a high-precision route to self-assembling materials. However, the complexity of these surfaces makes the design of predetermined nanostructures difficult.

Now, a new approach developed by Pochan and Kiick, in collaboration with the University of Pennsylvania’s Jeffrey Saven, offers the potential to shortcut this process.

Their research is documented in a paper, “Computationally Designed Peptides for Self-Assembly of Nanostructured Lattices,” published in Science Advances, an open-access journal of the American Association for the Advancement of Science (AAAS), on Friday, Sept. 9.

“The work relies on using mathematical models to predict which biomolecules are needed to produce the structure we want,” says Kiick. “We come up with a blueprint for a structure, and the model tells us what we need to do to create it — that is, which peptides we need to produce that structure. We’re building on work Darrin has been doing on the self-assembly of peptide-based soft materials, but our collaboration with the Saven group really pushes the field to a new frontier.”

Saven — whose group at Penn is developing theory, computational methods, and simulation techniques to study molecular systems — was at the core of the effort. He provided the theoretical foundation that was combined with UD’s experimental expertise.

“By linking computational design to the experimental control of assembly pathways, we have the potential to precisely control the construction of any new materials that we’d like to design,” says Pochan.

The researchers hope the work will ultimately lead to a web-based tool that provides customized solutions to user-input material properties and functionality.

Pochan notes that the research was funded by the National Science Foundation through its Designing Materials to Revolutionize and Engineer our Future (DMREF) program, which supports interdisciplinary teams working toward the goal of accelerating materials discovery and development.

“This type of collaboration helps not only the science but also the scientists,” says Kiick.

“To solve challenging societal problems, we need interdisciplinary teams, and this funding mechanism inherently promotes that. It’s really been great for our students because it teaches them how to talk across multiple disciplines.”
About the team and the funding

Pochan and Kiick are professors, Polzer is a postdoctoral researcher, and Haider and Tian are Ph.D. candidates in the Department of Materials Science and Engineering at the University of Delaware.

Saven is a professor and Zhang and Villegas are Ph.D. candidates in the Department of Chemistry at the University of Pennsylvania.