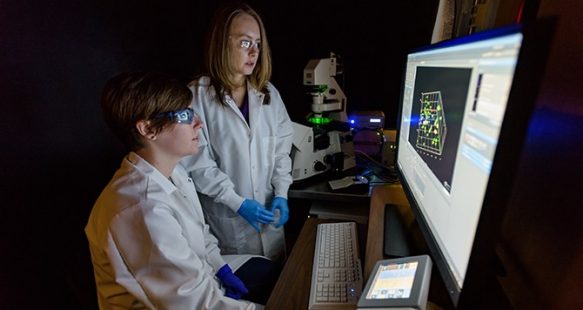 Although early detection and better treatments have resulted in more women with breast cancer surviving past the five-year mark, 20 percent of disease-free patients will experience a recurrence anywhere from five to 25 years later at a metastatic site — most often in the bone marrow or the lungs.

And their chances of surviving this secondary cancer are lower because it is often quite advanced before it is detected.

“There’s a significant clinical need to understand the mechanism of late cancer recurrence to determine disease markers and improve treatment strategies,” says the University of Delaware’s April Kloxin. “It has been hypothesized that late recurrences originate from tumor cells that disseminate to these other tissues in the body where they become dormant and are later re-activated.”

Kloxin recently received a $450,000 grant from Susan G. Komen aimed at developing a better understanding of this dormancy and reactivation process so that ultimately recurrence can be prevented.

“While estrogen receptor positive tumors typically have better initial outcomes, late recurrences are a concern,” she says. “If we can understand the mechanisms that drive the switch from dormancy to growth of this type of cancer, we can identify predictive biomarkers that may indicate which women are at risk and lay the foundation for the development of more effective treatment.”

Kloxin’s team plans first to create materials that mimic various metastatic sites and then identify key signaling pathways in cancer dormancy within these 3-D microenvironments. Second, they will focus on determining what regulates re-activation of the cancer cells within this cultured system. Finally, they will establish commonalities of dormancy or activation of patient-derived tumor cells in the culture model.

“This last goal is where we’re really excited about our collaboration with the Helen F. Graham Cancer Center and Research Institute in the Christiana Care Health System,” Kloxin says. “Evaluating cells from actual patients will provide us with the heterogeneity of real cases and enable us to compare our findings with the traditional markers observed by clinicians.”

The funding is part of a $32.7 million package of research grants recently announced by Komen, including more than $16 million to early-career investigators like Kloxin awarded through the organization’s Career Catalyst Research Grants.

These grants are intended to foster promising young breast cancer researchers by providing them with support for up to three years for research career development under the guidance of a mentor committee.

“Komen’s goal is to end breast cancer forever,” Kloxin says. “It’s exciting to be part of the global research community working to make this happen by using a variety of approaches and calling on the expertise of a broad range of people.”
About the team

April Kloxin is an assistant professor in the Department of Chemical and Biomolecular Engineering and Department of Materials Science and Engineering at the University of Delaware. Her mentoring committee and collaborators for the Komen grant include the following individuals:

• Kelvin Lee, Department of Chemical and Biomolecular Engineering and director of the Delaware Biotechnology Institute.

• Robert Clarke, Department of Oncology, co-director of the Breast Cancer Program at the Georgetown Lombardi Comprehensive Cancer Center, and dean for research at Georgetown University School of Medicine.