The art of cell health 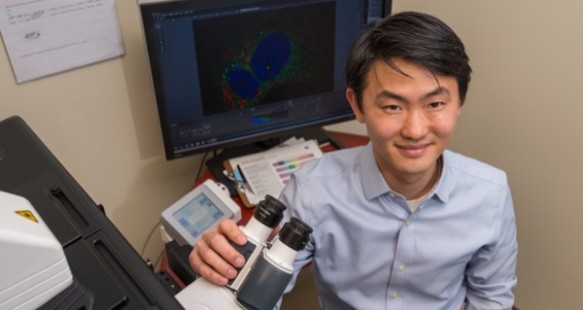 With vibrant colors, textured effects and a scientist’s savvy, Jeffrey Caplan, director of the University of Delaware Bio-Imaging Center, can take black-and-white data from a microscope, turn it into an illustrator’s masterpiece and show you something both miniscule and memorable.

His recent rendering of the inner life of a plant cell – which graced the cover of Developmental Cell journal this summer – is a strong case in point.

Editors used the image to draw readers into the issue, which includes Caplan’s article explaining new findings about the role of stromules in plant-cell health.

Stromules are tiny tether-like tubes that extend from and sometimes connect certain cell parts. In this study, researchers looked at stromules that emerge from chloroplasts – where photosynthesis occurs – when the plant’s immune system is triggered.

The cover image, resplendent with jewel tones of magenta, teal and gold, shows how stromules from chloroplasts connect with the cell’s nucleus to help it fight off microbial toxins and other pathogens.

It is not yet clear what the stromule accomplishes by that connection, Caplan said, but it may expedite signaling and a process called programmed cell death.

Programmed cell death is a defense mechanism used by cells against pathogens, in which cells are systematically killed off to limit the damage done and stop the spread of toxins.

Caplan was among the researchers who found that chloroplasts had a role in immune system responses in plants. Previously, they were believed to have significance only in photosynthesis, the process by which plants convert light to energy.

While pursuing his doctorate at Yale University in 2008, Caplan and others found that chloroplasts were vital to the plant’s immune response. A chloroplast protein (NRIP1) was involved in virus recognition.

In fact, they learned, a lot of signals were coming from chloroplasts. Now, Caplan and his collaborators have shown that stromules are also part of chloroplasts’ response to triggers from the immune system – such as salicylic acid and hydrogen peroxide.

The research and imagery give scientists and others unique perspectives on the inner life of plants and the cellular dynamics in play. Brief videos of the reactions, including this clip of laser-induced hydrogen peroxide generation in chloroplasts, were part of the study. The brief video shows how excess light from a laser can generate hydrogen peroxide in a plant cell. When incited by the light, the chloroplasts (the round, bluish-green structures) produce hydrogen peroxide, which sends a sort of SOS signal to the rest of the cell. Their study of stromules – the tether-like tubules emerging from the chloroplasts toward the nucleus in the center – shows those structures are involved in the process, too.

Other images in the study were produced with laser-scanning confocal microscopy and transmission electron microscopy.

“To see the actual cell changing so much during recognition of a pathogen, it was exciting,” Caplan said.

Now, he said, they are looking at how the system interacts with mitochondria – structures that provide energy, critical signals and other resources for cells. Bioimagery by UD's Jeffrey Caplan is featured on the cover of the journal "Developmental Cell."