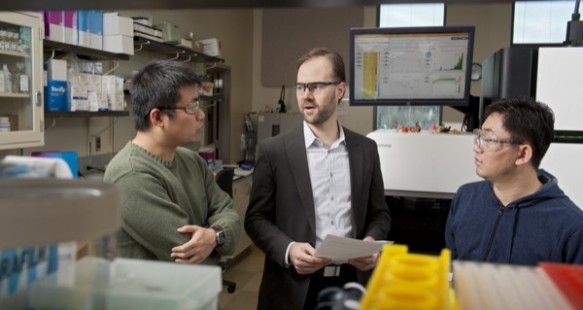 Studying a distant relative of viruses known as transposons, the University of Delaware’s Blake Meyers is working with researchers from Cold Spring Harbor (N.Y.) Laboratory to see how small RNAs in plants are activated and how they work to control transposons in the development of pollen.

The team at the Cold Spring Harbor Lab is led by Rob Martienssen, a professor and investigator at the not-for-profit research and education institution.

The findings of their research have been published in the March edition of Nature, an international weekly journal of science.

Meyers explained that transposons are mobile pieces of DNA that serve some useful purposes but are mostly invasive elements. They live in the genomes of all organisms, from bacteria to humans and plants, and the control of these transposable elements is important when it comes to maintaining the integrity of the genome — the chromosomal DNA — to ensure that the genes that form the blueprint for development are not disrupted.

Research in the field of small RNAs and their functions has been undertaken at UD by Meyers’ laboratory and that of colleague Pamela Green, the Crawford H. Greenewalt Professor of Plant and Soil Sciences. Both laboratories are housed at the Delaware Biotechnology Institute (DBI).

“We have brought to that research a different perspective, which is from a perspective based on genomics techniques and technologies that include advanced bioinformatics methods. While today we’re one of many labs using these methods, going back to 10 years ago, we led the early development of the platforms to characterize small RNAs globally,” Meyers said.

In recent years, the members of Meyers’ lab “were able to build on those experimental and computational methods to characterize an additional class of small RNAs, secondary siRNAs, in many plant species.” This led to the work with Martienssen and colleagues.

Martienssen’s interests are in transposon biology, particularly during the development of pollen, an important cell type in plants because it serves as the gamete, or reproductive cell, that gives rise to the progeny. Transposon control can be relatively relaxed in vegetative parts of a plant, like a leaf or a root, because that part is not going to give rise to the progeny. If the genome in vegetative cells is disrupted by transposon movement, any negative consequences are not passed on to future generations.

That is not the case with pollen.

“In the pollen, or the egg, that’s where transposon control becomes really critical because genomic changes get passed on to the progeny. If the offspring are less fit due to transposon-induced genomic changes, then in the long run they’re going to die out. So that’s why there has been a lot of evolutionary pressure to evolve these mechanisms for this kind of fine-tuned regulation of transposons,” said Meyers. “What this paper describes is really how a special class of small RNAs, microRNAs, can function outside of their normal roles to help control transposons in the pollen.”

Normally, transposons are well-controlled by suppressive variants of proteins that help to organize DNA. But the process of pollen development is complex and may provide an opportunity for transposons to escape this suppression. In those moments, the work described in the Nature paper shows that small RNAs can provide an additional level of restraint on transposon activity.

Martienssen’s team, in particular postdoctoral researcher Kate Creasey, who is the first author on the paper, were able to genetically refine the important genes for the control of this pathway. Meyers and his former graduate student Jixian Zhai, now a post-doctoral scientist at the University of California, Los Angeles, was able to help them with methods to characterize in more detail the small RNAs and their functional roles.

Cold Spring Harbor sent samples and data to the Meyers lab, and Creasey also visited DBI to conduct some of the research.

Using a sequencing machine at DBI, Meyers explained that they conducted their research using a series of algorithms that his lab has developed over the years. They also have a database structure and visualization system that is particularly powerful for the analysis of small RNAs in plants.

“That system is a combination of the database, processing the data, storing the data, visualizing the data and analyzing the data,” said Meyers. “Where I think we have unique expertise is in the analysis and the visualization of the data, and that’s really helpful for biologists because with the tools and websites we developed, it’s possible to make insights to combine really diverse data sets in a way that give the biologists visual clues as to what’s going on.”

To view the paper, visit this link.