Senators, feds, alumni check out latest in research at UD Day in DC 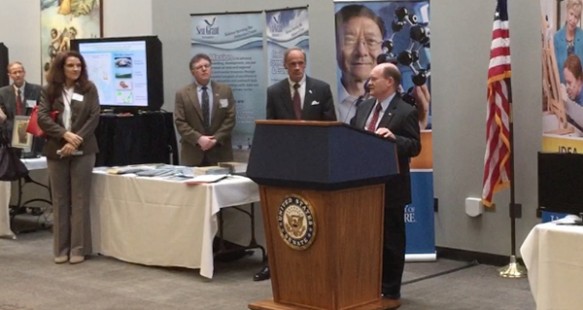 The goal of UD Day in DC was to help policymakers and other government officials understand the impact — both past and potential — of the projects and investigations under way in the University’s colleges and research centers and to foster the kinds of relationships that produce new ideas and opportunities. The work on display Wednesday included that by new and veteran researchers, all of whom had received federal grants to support their studies.

U.S. Senators Tom Carper and Chris Coons, both Delaware Democrats, stopped by to greet the UD contingent and offer support on their way to a vote in the Senate Chamber. Staffers for U.S. Rep. John Carney, Delaware’s lone member of the House of Representatives, also were present.

“This is a great opportunity for our staffs to understand better exactly what you’re doing and it is a very broad and inspiring array of work,” Coons said, “in everything from the human sciences to the hard physical sciences to new forms of energy conversion to ways to engage with the East Side of Wilmington, from things you’re doing in the Bader Institute and the things the Carnegie Endowment has recognized you for.”

Eighteen exhibit tables lined the walls of the room, providing diagrams, videos and samples of the work under way. The UDairy Creamery offered tastes of the increasingly famous ice cream produced by the dairy detail at the College of Agriculture and Natural Resources.

Oysters were the focus at another table, where researchers showed how the nutrient content in an oyster’s waterway affects its size and flavor. Taste tests, provided by George and Sons Seafood of Hockessin, were available at the same site.

Rhonda Prisby, assistant professor of kinesiology and applied physiology, offered a glimpse into the intricacies of bone marrow, especially her 2013 discovery that blood vessels in bone marrow may take on bonelike characteristics during the aging process, with some vessels closing off completely, constricting the flow of blood.

Chandran Sabanayagam, who hopes to send worms into space aboard NASA’s next shuttle launch, was present to discuss his team’s work on the genetic and epigenetic impact of zero gravity.

Coons stopped at the exhibit of the Institute of Energy Conversion to chat with senior scientist Bill Shafarman, who had samples of new flexible solar panels on display.

It was the third such event UD has hosted, and Charles Riordan, UD’s deputy provost for research and scholarship and professor of chemistry and biochemistry, said it was a success.

“Faculty, students and staff showcased a range of federally funded projects that highlighted the diversity and impact of UD’s research enterprise, from early education reading interventions to the analysis of environmental data of Superstorm Sandy,” he said.

Scores of alumni were on hand, too, to reconnect with their alma mater, including John Tapp, a 2014 graduate in computer engineering and computer science who dropped by to see Prof. Chase Cotton, who is working to help develop the new UD Cybersecurity Initiative and related courses.

Tapp said he got interested in cybersecurity when a high school computer science teacher talked to him about a breach that used something called “SQL injection,” a way to insert malicious coding into software. He looked for ways to learn more about security and says he was the first student enrolled in Cotton’s experimental course in cybersecurity, which now is part of the University’s cybersecurity minor.

After graduation, Tapp was hired as a consultant for Dulles, Virginia-based Cigital, which provides comprehensive cybersecurity services to business clients.

Edward Kimmel, a member of the UD Class of 1958 who went on to work at the Thunderbird Global School of International Management in Arizona, came from his home in Arlington, Virginia, with special interest in UD’S Institute of Energy Conversion. IEC Director Robert Birkmire was on the panel when Kimmel’s son, Yannick, made his doctoral thesis defense.

Alok Patel, who started his work as associate director of external affairs for the Delaware Biotechnology Institute in January, was attending UD Day in DC for the first time. He brought portable cellphone chargers with the DBI brand on them — a popular giveaway that, judging from the “do they still have those chargers available?” questions at the check-in desk, apparently proved an irresistible lure for some in nearby offices who might not otherwise have attended.

Patel said the event provided strong contact points for UD’s network of experts, scholars, alumni and those who need and support their work. That’s how synergy happens.

“I am always looking for connections,” he said. “How does this individual — working in a completely different place — how do they fit in with what we’re working on? It’s just a matter of listening to their story and then chiming in with how we can support them and how they can support us…. I always look at it from the other person’s perspective to see how they integrate into the web that we’ve created, with all this research going on in all these different segments.”

Patel had several ideas for one alumnus who said he wants to give back to the University and build his consulting company at the same time.