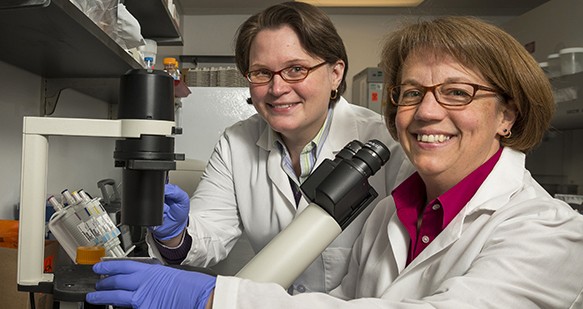 Scientists from the University of Delaware and the Fraunhofer USA Center for Molecular Biotechnology will begin working in February on two new collaborative research projects in the biomedical arena.

The projects have been selected for funding through a six-year partnership agreement involving the two institutions and the state of Delaware that was signed in 2011. The first collaborative research grants were awarded in 2012. The two new grants total more than $400,000 and will last for two years.

Ulhas Naik, professor of biological sciences at UD, and Fraunhofer scientist Tarlan Mammedov will use Fraunhofer’s proprietary plant-based system to produce junctional adhesion molecule A (JAM-A), a protein that regulates bleeding and a number of other physiological processes in human cells.

The proposed project aims to generate sufficient quantities of the recombinant protein to test its potential as a therapeutic agent for combating cancer, rheumatoid arthritis and thrombosis, the forming of blood clots in a blood vessel that can lead to heart attack and stroke. The protein also will be explored as a diagnostic marker for these diseases.

Building on a collaboration that started several years ago, immunologists Michelle Parent at UD and Jessica Chichester at Fraunhofer will explore a new protein-carrier molecule, lichenase (dubbed LicKM), isolated from the bacterium Clostridium thermocellum and expressed in plants, that holds promise as a new vaccine adjuvant.

Adjuvants are “helper” molecules that are added to vaccines to enhance the immune response, Parent explains.

“Currently in the U.S., there is really only one adjuvant in use — alum,” Parent says. “It does a great job in resulting antibody production, but it’s not really good at stimulating your T-cells to provide protection.”

Newer vaccine technologies, such as using plants as a protein production platform, have resulted in vaccines containing highly purified antigens — the substances that spur antibody production — with improved tolerability and safety profiles, according to Parent. She and Chichester hope to unravel the mechanism by which LicKM enhances cellular immunity.

“We are delighted to see these collaborative projects put in place that foster interactions between University and Fraunhofer scientists,” said Stephen Streatfield, director of research and development at the Fraunhofer USA Center for Molecular Biotechnology located in the Delaware Technology Park. “This is the second round of projects supported by Fraunhofer, and we have found such projects very helpful in initiating new research avenues that have the potential to extend into larger externally funded programs.”

A major goal of the collaborative grants is to explore ideas that will yield research results worthy of further investigation, with funding support from a federal agency such as the National Institutes of Health.

“The University of Delaware’s partnership with Fraunhofer is vital and growing,” said Charlie Riordan, vice provost for research at UD. “It offers valuable opportunities to synergize our complementary research expertise to most effectively address problems in human health. These collaborations will undoubtedly enhance the pace of discovery.”

The partnership continues to strengthen, Riordan said, through not only the collaborative research program, but also a graduate student exchange program that launched last year involving students at UD and from Germany, where Fraunhofer is headquartered.

Additionally, last year, an inaugural Fraunhofer-UD technology summit focusing on energy and life sciences brought together scientists from the two institutions and from around the world. A second summit is being planned for this October, Riordan said.