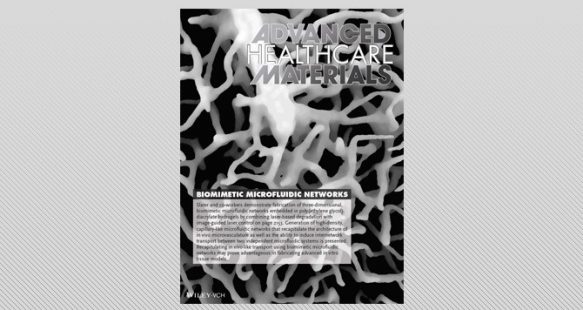 Tissue engineering has opened the door not only for the replacement of biological tissues in the body but also the creation of life-like platforms for disease modeling and drug development.

However, a major limitation of the current approach is the ability to generate functional vascular networks within tissues and organs.

“The system of vessels that transport blood throughout the body is very dense and complex, which makes creating it artificially a real challenge,” says the University of Delaware’s John Slater.

Now, he and several collaborators have demonstrated that constructing functional vascular networks may be as simple as taking a three-dimensional picture and using it as a digital template to guide laser-based degradation of hydrogels — jelly-like polymeric materials that retain a distinct three-dimensional structure.

The work is reported in a paper, “Fabrication of 3D Biomimetic Microfluidic Networks in Hydrogels,” published in Advanced Healthcare Materials. The paper is highlighted as the frontispiece to the Sept. 7 issue of the journal.

Slater explains that previous approaches to creating vascular networks have generally followed one of two paths.

The first is self-assembly of endothelial cells, which are the cells that line vessel walls, in a hydrogel matrix. The problems with this method are that it is difficult to introduce flow to the system; the vasculature is often immature and mimics unhealthy, tumor-like vessels; and engineers have little control over the architecture of the system.

The second general approach utilizes microfabrication strategies to predefine the vascular architecture, followed by seeding with endothelial cells. Although this technique allows complete control over the geometry of the system, including the creation of inlets and outlets for the pumping of fluids, it often does not produce an accurate replica of a real system due to resolution limitations.

In contrast, the new fabrication method generates microfluidic networks — systems that process small amounts of fluids using channels with dimensions of tens to hundreds of micrometers — which closely mimic the architecture, size, tortuosity, and density of vascular systems in our body.

“The beauty of this approach is that it can be used on any vascular system,” Slater says. “While most research has focused on blood vessels, there are a number of microfluidic systems in the body, including, for example, the lymphatic system.”

He also explains that while the lymphatic system and the blood vessels in the body never actually connect in capillary beds, fluids are transported between the two systems.

The researchers have successfully met this challenge as well, inducing inter-network transport between two microfluidic systems.

“Our long-term goal is to create in vitro, or lab-based, disease models that accurately reflect what happens in vivo, or in the body,” Slater says. “We can use these models to develop and test new therapeutics. These tissue-engineered devices could potentially make screening much more efficient while reducing the need to test drugs on animals and hopefully increasing success in human trials.”

Heintz is a doctoral student in biomedical engineering at UD working in Slater’s Lab.

Bregenzer earned his bachelor’s degree in biomedical engineering at UD and is now pursuing a doctorate at the University of Michigan.

Mantle a is doctoral student in chemical and biomolecular engineering at UD working in Lee’s lab.

Lee is director of the Delaware Biotechnology Institute and Gore Professor of Chemical and Biomolecular Engineering at UD.

Slater is assistant professor of biomedical engineering at UD.