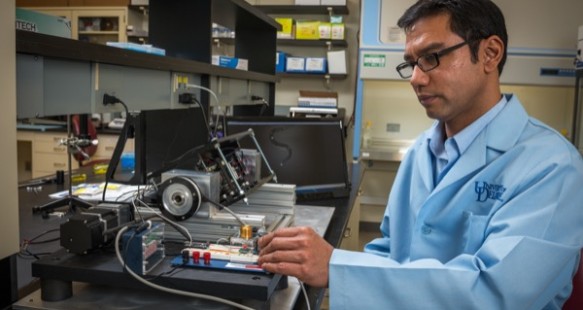 With apologies to the late NASA legend Neil Armstrong, whose boots were the first to step onto the surface of the moon, you might describe Chandran Sabanayagam’s research at the Delaware Biotechnology Institute as one small freefall for a worm, one giant leap for biogenetics.

Sabanayagam is studying the effect of zero gravity on the worm’s genes, work that could produce new insights into the effect of long periods in space on the likes of Armstrong or Capt. Scott Kelly, who next month will begin a year-long assignment in space. In his State of the Union speech last month, President Barack Obama said Kelly’s trip will help prepare the way for a mission to Mars.

Sabanayagam’s worms may go to Mars someday but first they continue their pioneering freefalls at DBI, preparing for a trip to the International Space Center.

He presented his work this week in Baltimore at the 59th annual meeting of the Biophysical Society and American Institute of Physics.

The worm Sabanayagam’s team employs — a common round worm called Caenorhabdtis-elegans, or C. elegans for short — has none of the credentials of an astronaut, but it does have many genetic similarities. More than 70 percent of its genes are found within human genomes, Sabanayagam says.

At full stretch, the little worm reaches no more than a millimeter in length, so it’s useless for bait. But it may be the Swiss Army knife of microbial research.

It lives in both soil and water.
It is neither a parasite nor a pathogen (a disease-carrier).
It is more sophisticated than yeast or bacteria, with a fully developed nervous system.
It is transparent, so its parts can be seen without any need for surgery.
It is hermaphroditic, with both male and female capacities.
It is lightweight and doesn’t eat much.
It reproduces quickly.

Quick reproduction is helpful because C. elegans has a short lifespan — about two weeks in all. And that quick turnaround gives scientists opportunity to see generational effects.

Studies in weightlessness require adaptive techniques here on Earth, with its strong gravitational pull on everything that touches the ground.

To simulate zero gravity, Sabanayagam and his team are using a new generation of the clinostat, an instrument invented more than a century ago when a botanist wanted to know how gravity affected biological life. Would plants grow differently if no gravitational pull was exerted upon them?

The clinostat was developed to explore that question, allowing researchers to mount an experiment on a rotating platform that would keep the specimen turning.

The experience had a dramatic effect on plants. Instead of growing straight up, they grew in a spiral, Sabanayagam said.

About 50 years ago, researchers started looking at cellular responses — putting bacteria, yeast and other cells through similar processes.

Sabanayagam and his team have developed a clinostat that allows genetic-level study and draws on the powerful capacities of the Delaware Biotechnology Institute to analyze the data.

To put the worms into an environment approaching zero gravity, Sabanayagam’s team places them in a small amount of water, encased between two round glass slides. The “worm chip,” as he and his colleagues call it, is placed in the clinostat where it rotates at a speed slow enough to protect the worm from colliding with the frame of the device and fast enough to keep the worm suspended in the liquid and free of gravitational pull.

Ideally, he said, the experiment would be done in air. But the viscosity of air is too thin, so a fluid environment is necessary.

“No one has an instrument like this,” he said. “It puts us in a different ballpark.”

A camera is mounted to the clinostat, on a platform that rotates at a fixed speed matching that of the turning worm chip. The images it produces have no blur. With those images and DBI’s DNA sequencing capacities, the research team now can collect enormous amounts of data and provide analysis never before possible. Already, Sabanayagam’s team has 75 gigabytes of data.

Researchers can look more closely at specific genes, narrowing down 10’s of thousands to 100 or 20, Sabanayagam said.

The genetic impact of space travel on astronauts is uncharted territory, he said. They don’t return from space with three eyes or other obvious mutations, but more subtle changes may be occurring.

The freefalling worms at DBI might be the first to know.