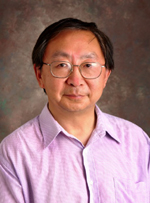 
Dr. Gao’s research interests include linking the power of high-performance computing technology to the rapid progress of high-throughput genomics to help understand the biological systems. He is currently leading a group of post docs and graduate students working in the areas of microarray technology and its data analysis and visualization — from gene expression data to biological pathways, and to the modeling and simulation of the associated biological functions.

Since September 1996, Dr. Gao has been on the faculty of the University of Delaware, where he is the founder and leader of the Computer Architecture and Parallel Systems Laboratory. Another of his research interests centers on the development of large-scale parallel computer systems, from clusters of PCs to the architectural blueprint for a supercomputer one million times more powerful than the most advanced personal computer now on the market, capable of processing one million-billion commands or “floating point operations” per second. His research has received support from the National Science Foundation (NSF), the National Aeronautics and Space Administration (NASA), the National Security Agency (NSA), the Defense Advanced Research Project Agency (DARPA) and from industry.

Prior to coming to the University of Delaware, Dr. Gao served as a professor of the School of Computer Science, McGill University; Montreal, Canada.

Professor Gao has published more than 100 technical papers in international conferences and journals in his field. He has served on the organizing committee of numerous international conferences in his profession. Currently, he serves as an associate editor of IEEE Transaction on Computers and the IEEE Concurrency Journal, and is a distinguished visitor of the IEEE Computer Society.