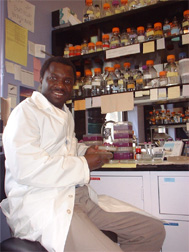 
Research in the Fondong lab is on cassava viruses (special emphasis on family Geminiviridae). Geminiviruses are among the most devastating plant pathogens worldwide and together with potyviruses (family Potyviridae) constitute the two largest and most important plant virus families. Geminiviruses have circular single-stranded DNA genomes and have four to eight genes that are expressed from both strands of the double-stranded DNA replicative intermediate. Transcription of these genes occurs under the control of two sets of promoters: two bidirectional and one monodirectional. Viral proteins function to facilitate virus replication, virus movement, assembly of virus-specific nucleoprotein particles, insect vector transmission, and to counteract host defense responses. These viruses replicate in the nucleus using the host transcription and replication machinery. We are therefore interested in host proteins that interact with viral proteins and thus important in the virus replication cycle. With the recent emergence of cassava brown streak viruses (family Potyviridae) in East Africa, we have expanded our focus to this new threat.
We are particularly interested in generating resistance to these cassava viruses using RNA silencing approaches. RNA silencing is a phenomenon that regulates gene expression and protects plants from transposable elements and viruses. Thus, RNA silencing-based resistance has become a powerful tool used in engineering virus-resistant plants. Our approach focuses on trans-acting siRNA (tasiRNA), microRNA, and arrays of siRNAs from long dsRNA generated from transgenic viral segments. Our transgene constructs are designed to target and degrade important viral genes. Because cassava is a rather difficult to transform plant due especially to low transformation and regeneration frequencies, our technologies are assessed for efficacy in Nicotiana benthamiana, a general virus permissive host, prior to introduction into cassava.