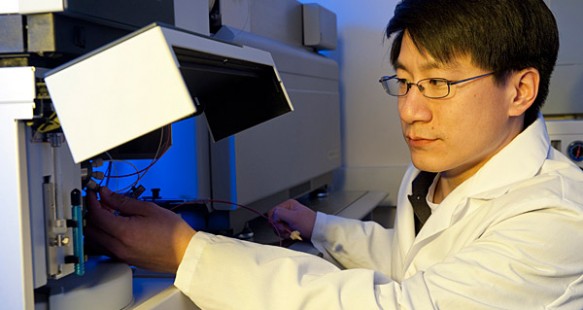 Delaware Bio will recognize some of the state’s brightest bioscience stars during its 2016 Annual Awards Gala, and nearly all of them have ties to the University of Delaware.

The 2016 awards celebrate the outstanding work of the honorees to foster the state’s bioscience presence, including growing the pipeline of educated students and skilled workers as well as cultivating a culture within the state to encourage innovation, service and research. About 300 of the area’s top leaders in science, academics, industry and medicine will fill the DuPont Country Club on Wednesday, April 20, for the sold-out event.

“We owe the award honorees tremendous gratitude for their contributions, passion and dedication to this industry,” said Bob Dayton, president of the Delaware Bioscience Association, a non-profit trade association focused on promoting the state’s bioscience industry. “It is individuals and organizations like these honorees who are making advancements that can inspire growth in the bioscience industry which helps to heal, fuel, and feed the world.”

The award recognizes significant contributions to the advancement of life science research at an academic or medical research institution in the state. Lee, director of the Delaware Biotechnology Institute, also is a member of the Delaware INBRE steering committee.

His lab works on proteomics and genomics approaches applied to the manufacturing of biologics and to the diagnosis and treatment of Alzheimer’s disease. DBI supports multidisciplinary, collaborative academic research across the state as well as through research partnerships with industry.

Lee said the state of academic research in Delaware, already very good, is improving all the time.

He said there’s been a tremendous shift in the research culture at Wesley since the Delaware INBRE partnership began. Wesley’s population includes a significant number of students from groups traditionally with limited access to higher education. About 60 percent of students are minorities, and many students are the first in their family to attend college.

Support programs have been put in place to encourage students to pursue a career in the STEM field. Students also start working on research projects during their freshmen year. Among those involved in STEM studies, almost 85 percent go on to graduate school, D’Souza said.

“To change the culture of an institution is not easy. I think when people see our students winning awards – and these are national awards – when they see all that is happening, they realize that this is the way of the future,” D’Souza said. “We raised the bar pretty high, and our students stepped up and went higher.”

Delaware Bio’s Company of the Year honors goes to Labware, founded by Vance Kershner, who graduated from UD in 1979 with a mechanical engineering degree. Labware, a global company with offices in 15 countries, develops and implements software for automating laboratory operations. Its worldwide headquarters is located in Wilmington.

Kershner has remained actively involved with the College of Engineering while growing his company. He serves as chair of the Engineering Advisory Council and was awarded the 2015 Distinguished Career Award by the college for his efforts to remain engaged.

“One of the things I like so much about Delaware Bio is that they truly are a broad-based organization with deep ties into UD and the local business community,” he said.

Other awardees include U.S. Rep. John Carney, a 1986 UD master of public administration graduate who was honored as Government Official of the Year; Brian Tracy, CEO and co-founder of White Dog Labs, honored for innovation; Melanie Mundell, a 2009 UD grad and biotechnology teacher at Newark Charter School, named Educator of the Year; and Helen Stimson, senior vice president and general manager of Agilent Technologies, recognized for her service. Stimson is a member of the Alfred Lerner College of Business and Economics Advisory Council and the Biomedical Engineering Advisory Council.

Steven J. Stanhope, UD associate deputy provost for research and scholarship and principal investigator for Delaware INBRE, said the gala spotlights the important role of biomedical research in the state. It also provides a chance for bioscience professionals to network and develop partnerships that can translate into improved patient care and lifesaving medical advances.

“We are proud to have a platform where we can highlight the accomplishments of bioscience champions in the state and draw attention to the importance of their endeavors,” Dayton said.