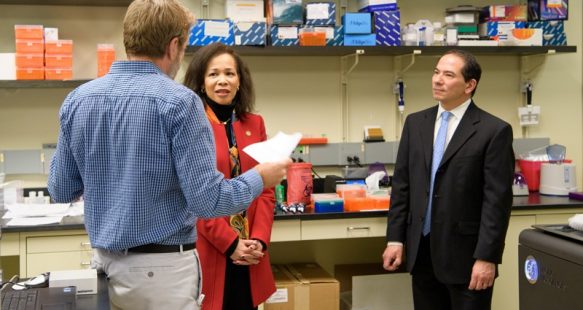 It’s not clear if this is a scientific term, but U.S. Rep. Lisa Blunt Rochester, D-Del., said she was "blown away" by her tour Tuesday of the Delaware Biotechnology Institute, a power station of tools available to researchers and housed next to the campus of the University of Delaware.

"I’m blown away by all you’re doing here," she said. "It’s incredible….The potential is exciting."

For those who haven’t yet explored that facility, it is an astonishing array of state-of-the-art bioimaging, DNA sequencing and bioinformatics capacity.

Or to bring it down to near street level, DBI’s muscle allows researchers to:

The list goes on, but Blunt Rochester saw enough Tuesday to recognize DBI’s value to the advance of science, increased job creation and economic development in Delaware and its extraordinary potential for education and collaborative work.

Blunt Rochester knows a good bit about those areas, having served as Secretary of Labor and state personnel director for Delaware before her election to Congress in 2016. She now serves on the House Education & Workforce Committee, the Agriculture Committee and its Biotech Subcommittee.

Established in 2001, DBI has a powerful cadre of University of Delaware researchers in-house, with 16 faculty labs spanning four of the University’s colleges, according to John Koh, interim director. More than $200 million of UD’s research depends on DBI, including more than $60 million in fiscal year 2016, he said. DBI needs a strong stable of researchers in order to apply for equipment grants and the researchers need DBI’s equipment to enable their research and the grants that support them. DBI also partners with more than 100 non-UD researchers, including many from Delaware State University, Delaware Technical & Community College, Wesley College, Nemours and Christiana Care Health System.

Before her tour of DBI, Blunt Rochester met with members of a new group of scientists who were meeting there. The group, called STRIDE – Science, Technology and Research Institute of Delaware – was formed by industrial scientists after the Dow-DuPont merger to help retain the Delaware Valley’s extensive scientific talent.

During her tour, Blunt Rochester heard from Koh, Jeffrey Caplan, director of DBI’s Bioimaging Center, Bruce Kingham, director of the DNA Sequencing Center, and watched a virtual-reality presentation offered up by Shawn Polson of the Center for Bioinformatics and Computational Biology.

They talked about researchers’ work in plant sciences, biopharmaceuticals, precision medicine and biofuels, to name a few. And they gave examples of projects in applied research, technological access and proof-of-concept work by entrepreneurs.

"Some of this work involves very exciting physics that was inconceivable even 10 years ago," Koh said. "This is changing the kinds of questions we can ask about biology and disease."

Groundbreaking work has been done at DBI, Koh said, adding insight to many studies that extend beyond UD.

"We are an infrastructure for research," Kingham said, "not only at UD but around the state and around the world as well."

The Bioinformatics Center provides software and hardware, database services, training and comprehensive analysis of the enormous quantities of data generated by researchers. That work makes a mountain of information meaningful and useful. Its servers have enormous power, Polson said, with two terabytes of memory.

Blunt Rochester also learned about DBI’s work in area schools, its coordination of the Delaware BioGENEius Challenge and development of special programs that take the science and the scientists to schools in Delaware’s Kent and Sussex counties, where travel to Newark might be too time consuming or costly.

"This is the Delaware way," Koh said. "We work really well together."

Blunt Rochester, who earned a bachelor’s degree at Fairleigh Dickinson University and a master’s at UD, said she wanted to help get the word out – about the science, the training, the collaborative projects and the other possibilities unfolding at DBI.

“The fact this can have an impact on the world and it’s right here in Delaware is really exciting,” she said.