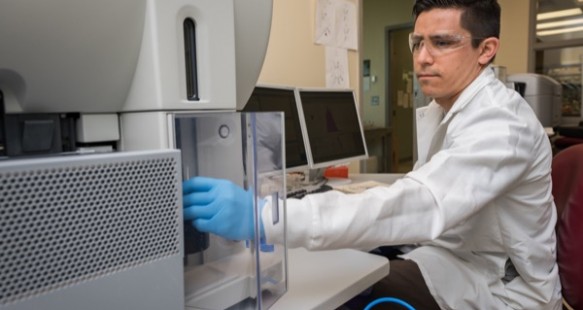 A team of University of Delaware researchers is opening wider the door for those who study the vast world of microbes. A paper published in Nature Communications on May 6 describes a new technique they developed for examining how bacterial genes function.

The team, based in the lab of Eleftherios Papoutsakis, Eugene du Pont Chair of Chemical Engineering, created specially engineered E. coli bacteria that will host, recognize and respond to the genes of numerous other bacterial species. The paper’s two lead authors are Nicholas Sandoval, a postdoctoral researcher, and Stefan Gaida, a former Ph.D. student who is now doing postdoctoral work in Germany.

Researchers rely on bacteria and other tiny organisms as sources of new chemicals and biological functions. Microbes can manufacture useful drugs, convert plant fiber to fuel, or neutralize oil slicks and they play vital roles in the bodies of humans.

“The gut microbiome protects humans from various diseases, helps with digestive health and has even been implicated in the way we behave; devising methods to explore it is important,” says Sandoval.

Yet because so little is known about how they live, researchers still can’t grow most microbes in the laboratory, limiting what can be learned from them. “You have an enormous amount of DNA in a single gram of soil that comes from many organisms,” says Papoutsakis, “most of which we cannot culture.”

Scientists have sidestepped this problem by creating “metagenomic libraries.” They extract the DNA (the metagenome) from, say, a sample of soil, thereby obtaining random bits and pieces of genetic material from many different organisms.

Then they insert each fragment of DNA into an E. coli bacterium, so that each bacterium contains a different fragment, a “volume” from the larger library. With luck, E. coli’s cellular machinery will follow the instructions from the foreign DNA — for example, to manufacture a specific protein.

Searching through the functions and products of DNA cultivated this way, known as a functional screen, lets researchers find new proteins or cellular activities without having to pinpoint a specific gene beforehand, or even know what species it belongs to.

“You look, say, for things [like] antibiotic resistance genes [or for enzymes] that will degrade a nasty chemical or that will do a particular transformation,” explains Papoutsakis.

This approach relies on E. coli being able to initiate a process called transcription, in which the cell uses a chemical called RNA to make a template of the information contained in a gene. The encoded RNA then performs a function of its own or is used by the cell as a blueprint for manufacturing a protein.

Unfortunately, when it comes to foreign genes, E. coli often has a hard time recognizing promoters — the sections of DNA that tell the cell where to start transcribing genetic information.

“The goal of this work was to engineer bacteria that would be able to better express a larger variety of genes coming from the metagenome,” says Sandoval, “so that when we do perform these functional screens with E. coli, we’re getting a much broader representation of the actual genetic population.”

The researchers found that when they engineered E. coli to produce the RpoD sigma factor from the microbe Lactobacillus plantarum (Lpl), it allowed E. coli to recognize all gene promoters it encountered, from any source.

They had created a strain of bacterium that would be able to transcribe any fragment of foreign DNA that was still connected to a promoter.

Getting the green light

The team tested many different sigma factors to figure out which one helped E. coli transcribe the largest number of foreign gene fragments

Gaida came up with an elegant way to see how many fragments were transcribed. Each foreign DNA fragment is packaged into a larger DNA structure called a vector before it’s implanted in E. coli. In the vector, right at the end of the foreign gene fragment, the researchers inserted the gene for green fluorescent protein (gfp).

If E. coli’s cellular machinery recognized and transcribed the foreign genetic information, it would then move on to transcribe the gfp gene and produce GFP, which glows when exposed to ultraviolet light.

The researchers could run the E. coli cells through a machine called a flow cytometer and see how many glowed green, giving them an idea of how many foreign DNA fragments were successfully transcribed.

Using this method, they tested different sigma factors on genomic libraries from several species, and found that E. coli with the Lpl sigma factor transcribed up to 39 times as many foreign gene fragments as regular E. coli cells. When they ran the test with a true metagenomic library — from a soil sample taken outside the lab — their new E. coli strain showed ten times as many green-glowing cells as the control sample.

“It was surprising and really fantastic that the Lpl sigma factor worked on every library that we tested, and extremely well with the metagenomic library. We found something that is very robust in its efficacy,” says Sandoval. “We now can screen a much larger proportion of the metagenomic or heterologous genomic DNA libraries that were previously not functional.”

The newly engineered strain of E. coli is the subject of a pending patent, and the authors believe it will have broad use among genomics researchers.

“This has an extremely broad field of application from basic biology and ecology all the way to biotechnology and biomedical applications,” notes Papoutsakis. “For example, say I would like to create an E. coli cell that can produce a complex molecule of a precursor to a pharmaceutical. Or for doing bioremediation, basically converting a toxic chemical to a nontoxic chemical. I have this partial set of biological reactions to produce this, but I’m missing several bits, and do not know where they may be. I know, however, that there’s a different kind of organism out there that has that, so I can create a library from that organism and screen to identify this [product] and be able to complete the pathway.”

Says Sandoval, “Hopefully this work will greatly enhance the ability to do functional screens on the metagenome and allow everyone who does these screens to look for interesting health and industrial applications, much more efficiently and much more easily.”