Home > News > Heart of the matter

Heart of the matter 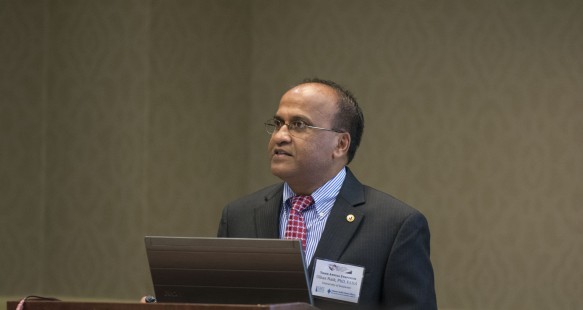 No one seemed to mind being in the warm conference room of the Embassy Suites in Newark on Friday, Oct. 11.

Outside, it was cold, windy and rainy. Downright dreary. But the atmosphere inside was quite the opposite, as researchers, physicians, scientists, students and others came together from across the Northeast and Mid-Atlantic for the third annual symposium of the Delaware Cardiovascular Research Center.

The symposium was sponsored by the Delaware Biotechnology Institute (DBI), Delaware INBRE and the Delaware Health Sciences Alliance (DHSA).

The DCRC was born four years ago, the brainchild of Ulhas Naik, associate professor of biological sciences at the University of Delaware.

Heart disease is the No. 1 killer worldwide, taking more lives than cancer each year.

This year, if the symposium is any indication, Naik’s vision is coming to fruition. It was attended by DHSA members as well as scientists, physicians, students and others from Temple University, the University of Pennsylvania, Lehigh University, Children’s Hospital of Philadelphia (CHOP), Penn State University and the Wyss Institute in Boston.

Naik welcomed the 100-plus attendees and gave a brief overview of the DCRC and its members, the core instrumentation facilities it has helped provide and the international partnerships it has fostered in places like the United Kingdom, China and Puerto Rico.

“I’m pleased to see this going beyond UD and the Delaware Health Sciences Alliance,” said Randall Duncan, chair of UD’s Department of Biological Sciences. “I want to see this program grow.”

The DCRC membership already has pulled in five major research grants from the National Institutes of Health and seven fellowships through the American Heart Association since its inception, Naik said. This is despite tight funding times after economic recession and the sequester, among other budgetary setbacks.

Duncan said what pleases him most is seeing the graduate students coming in through DCRC. He called them “hybrids” of students from other fields, like chemical and biomolecular engineering, interested in cardiovascular research. The collaboration “expands the horizons for what they do in the future,” he said.

The morning keynote speaker, Edward Lakatta, the founder and director of the Laboratory of Cardiovascular Science at the National Institute on Aging, spoke about aging from the perspective of the arterial wall. Aging is, he said, a “shift in our reality,” a “mutually enslaved system of DNA and our environment.”

For Naik, who studies how blood clots form and was recently awarded a $1.2 million grant from the National Institutes of Health, his focus on cardiovascular work and the investment he’s made in DCRC is also deeply personal. Heart attacks have claimed the lives of three of his brothers.

“My interest is I want to see what we can do about that,” he said. Domenico Grasso, Provost at the University of Delaware