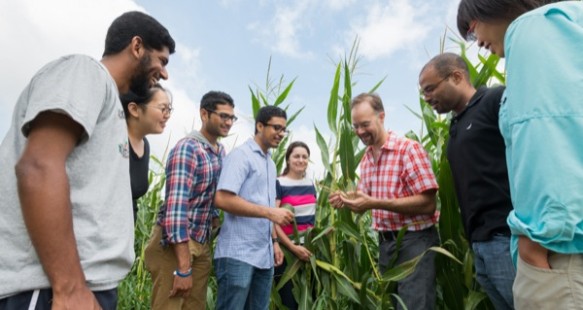 Researchers at the University of Delaware and other institutions across the country have been awarded a four-year, $6.5 million National Science Foundation grant to analyze developmental events in maize anthers and tassels, the male reproductive organs that produce pollen.

The results of the research could have long-term implications for the hybrid seed industry, characterizing novel biological pathways for the creation of genetically male-sterile plants, particularly in the cereal crops.

Blake Meyers, chair of the Department of Plant and Soil Sciences in UD’s College of Agriculture and Natural Resources and the Edward F. and Elizabeth Goodman Rosenberg Professor of Plant and Soil Sciences, is the principal investigator for the project. He leads a research laboratory at the Delaware Biotechnology Institute (DBI) and now has a small corn crop grown on UD’s Newark Farm.

The co-principal investigators leading parts of the project include Virginia Walbot, professor in the Department of Biology at Stanford University, and Gregory Abram, a researcher in visualization at the Texas Advanced Computing Center. Walbot brings to the project the expertise of her laboratory in maize and particularly anther developmental genetics, while Abram will develop tools for visualization of anther development at a cellular scale.

Randy Wisser, UD assistant professor of plant and soil sciences, helps the group with the growing, multiplying and harvesting of the corn grown on the campus farm.

Meyers stressed that while the long-term implications of the project could be very important for the seed industry, the researchers are primarily interested in two aspects of basic biology: first, contributing new information about ribonucleic acid (RNA) pathways important for pollen and anther development, and second, developing a better and deeper understanding of anther development. Addressing these objectives will require an integration of genetic, molecular, developmental, and computational techniques.

“Our study is really basic research — we’re trying to understand development and a couple of novel small RNA pathways, but we think that the impact of the project ultimately will be important for plant production,” said Meyers.

For hybrid seeds, producers use pollen from the paternal plant to cross-fertilize a genetically distinct maternal plant. While doing this, it is essential that they prevent the maternal plant from pollinating itself.

By understanding the genetic mechanisms underlying pollen development, producers can devise techniques to regulate male fertility or sterility and “it offers an opportunity to create genetically male sterile plants, which would really facilitate the production of hybrid seed,” Meyers said.

“You might have two parents: A and B, and A is the pollen donor, so they’re left untouched. B is the one that’s producing the seed and those are all detasseled. The only way you can get seed on plant B is with the pollen from plant A; that generates the hybrid seed which is sold to farmers. The seed produces plants with substantially better yields because of the effect known as ‘hybrid vigor’. These A/B progeny plants have greatly superior yields than either of the A or B parental lines,” said Meyers.

The trend in the seed industry is to use genetic control of pollen development rather than manual detasseling, because it’s more precise, cost-effective and safer.

The project builds on prior research that was published over the last five years by several other groups that showed there are two unusual classes of small RNAs in the flower of grasses. Because that work focused on rice, in which the male and female are all in one flower, the work couldn’t separate male versus female roles for these small RNAs.

“In maize, the tassel – or male inflorescence – is separate from the ear – the female inflorescence. This makes it really easy to separately analyze the development and composition of male and female flowers in maize, particularly relative to many other grasses,” said Meyers.

It turned out there is a huge abundance of small RNAs in the two classes that were described in a 2009 paper, and Meyers said that his group thought that was interesting because in other plants, such as the model plant Arabidopsis, those small RNAs hadn’t been observed.

“Lots of work has been done on small RNAs in Arabidopsis and its anthers, but these particular types of small RNAs had never been described. What we learned was that they’re not found in that branch of large group of flowering plants known as the ‘dicots’ but they seem to be highly enriched in the grasses, such as maize or corn, rice, wheat, and a few other grasses that we’ve looked at,” said Meyers.

One claim that the researchers have made is that the maize anther small RNAs are analogous to small RNA classes that have been identified in mammals. The small RNA classes in maize and mammals don’t have a common origin and evolved completely independently.

“Beyond the basic research insights we are making, anther biology is really important because it’s a component of the hybrid seed industry, which is big business,” said Meyers.

Another component of the project involves the group creating a “virtual anther.”

Meyers said the anther is a relatively simple structure relative to other structures in the plant, like the leaf, root, or the entire flower, and the anther has a fairly well-defined differentiation pattern.

“At the end of cellular differentiation, the anther has five cell layers. The sole purpose of the anther is to produce the pollen, and so the outer cell layers break down once the pollen starts to mature and then ultimately, it splits open and the pollen is released,” said Meyers.

Because Walbot has a laboratory that has precisely defined the steps in the pattern of anther development, the group is aiming to create a virtual or computational “wire frame” model of how the anther develops.

The group is also using male-sterile mutants with developmental defects in the production of pollen. These mutants vary in the stages at which development is blocked, and comparisons with normal, fertile anthers will help the groups to understand the dynamics of the small RNAs and other genes of interest.

“From these materials, we’re going to be generating lots of data – small RNAs, gene expression data, some protein data — and we’d like to be able to map these data sets onto the virtual anther. This will enable users, whether it’s in our collaborative group or the public from anywhere in the world, to look up the information that we’re generating and use it to develop and ultimately test hypotheses,” said Meyers.

The project will also involve Bing Yang, an associate professor at Iowa State University, whose laboratory is skilled in making precise modifications to genomes using cutting-edge techniques. “The plant lines produced by the Yang lab will allow the project to test some of the hypotheses that emerge from our datasets,” said Meyers.

The members of the Meyers’ lab group include post-doctoral researchers Sandra Mathioni, Kun Huang and Chong Teng, and a team of students from the bioinformatics and computational biology program, including Atul Kakrana, Reza Hammond, Parth Patel and Saleh Tamim.