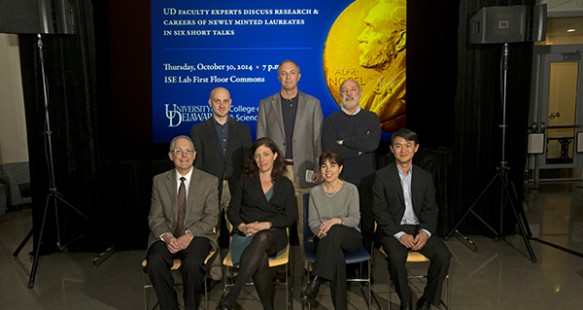 Seven University of Delaware faculty members with expertise in each of the six areas of study that won this year’s Nobel Prizes discussed the significance of the winners’ work at an Oct. 30 public event, held appropriately in the Interdisciplinary Science and Engineering Laboratory (ISE Lab) on campus.

“This year, the prizes are remarkably interdisciplinary,” said Doug Doren, senior associate dean of the College of Arts and Sciences, who organized the annual Nobel Symposium. For example, he noted that the prize in physiology or medicine was explained at this year’s symposium by a psychologist, the chemistry prize by a biologist and the physics prize by a materials scientist.

Doren welcomed the audience to the series of short talks, saying the 8-year-old event brings together the University and the wider community to learn about the kinds of ground-breaking work that is rewarded by the Nobel organization and that is often not fully explained in news coverage of the prizes.

“Our faculty speakers do research in areas that are closely connected to the work being recognized, and they bring their personal insights to the talks,” he said.

Following are the 2014 prizes highlighted at the symposium.

Bruno Thibault, professor of French in the Department of Foreign Languages and Literatures, discussed French novelist Patrick Modiano, who won the literature prize for what the Nobel Committee said was “the art of memory with which he has evoked the most ungraspable human destinies and uncovered the life-world of the occupation.”

Thibault said Modiano, whose father was a Nazi collaborator during the German occupation of France, has written some 30 novels, almost all focused on the World War II period and on similar themes of identity and memory. He described Modiano’s first novel, La place de l’étoile, which was the start of a trilogy, as “rather disturbing” and as “a dark and grotesque farce.”

Modiano’s work has won numerous literary awards and is extremely popular in France, although few of his novels have been translated into English, Thibault said. The best-known of his books in English is probably Out of the Dark, Thibault said, the story of a detective with amnesia. Modiano also wrote the screenplay for the Louis Malle film Lacombe Lucien.

At the conclusion of Thibault’s talk, Deborah Steinberger, associate professor of French, read a passage from Dora Bruder, a novel in which Modiano relied on the true story of a Jewish teenager in Paris who became a victim of the Holocaust.

Amy Griffin, associate professor of psychological and brain sciences, described the work done by John O’Keefe, May-Britt Moser and Edvard I. Moser “for their discoveries of cells that constitute a positioning system in the brain.”

“How did you get here tonight?” Griffin asked the audience at ISE Lab. For those already familiar with the campus, she said, there was no need to use a map or an electronic global positioning system (GPS); rather, “A GPS has been built into your brain and nurtured by evolution.”

She described O’Keefe’s 1971 discovery of “place cells” in the hippocampus region of the brain, representing different places in the environment and allowing for a “cognitive map” in the brain. More than three decades later, she said, the Mosers made another discovery of new cells — “grid cells,” enabling the brain to form a system of spatial coordinates and “essentially acting as an internal compass.”

Griffin, a neuroscientist whose own work focuses on the hippocampus and the process of memory, said research stemming from the Nobel laureates’ work is being conducted on epilepsy and holds promise for work with various brain disorders.

Michael Arnold, associate professor of economics and director of the UD Honors Program, spoke about this year’s Sveriges Riksbank Prize in Economic Sciences in Memory of Alfred Nobel, which was awarded to Jean Tirole “for his analysis of market power and regulation.”

Beginning in 1890 with the Sherman Antitrust Act, market regulators generally worked toward a goal of supporting competition and limiting mergers, Arnold said. But, he said, until Tirole’s work in the late 1970s and early 1980s, there was no economic research to guide policy in regulating those industries that are dominated by a few large businesses or by a monopoly.

Tirole’s research found that some of the tools regulators had been using, such as capping prices and limiting cooperation between companies, were not always beneficial. He recommended tailoring policies and regulations to specific situations.

Arnold gave examples of several areas in which Tirole’s work has had significant impact, including setting government procurement policies (such as deciding the optimal type of contract to award to bidders), regulating telecommunications industries (as in the Comcast/NBC merger) and dealing with so-called “friendly monopolies” like Google and Amazon.

Zide began his talk by showing the audience a blue laser pointer, saying that he was the only speaker at the symposium who was able to hold the Nobel Prize-winning research in his hand.

“The physics prize is really unusual this year because there’s no new physics” in the laureates’ work, which instead was based on materials science, he said. He traced the research over the years that led to the original red LEDs in 1962 and the new discoveries that enabled the development of blue lights. Blue, he said, was the most challenging to develop but is particularly important because it is necessary in order to make white light.

White LEDs, Zide said, are extremely efficient sources of light, with an incandescent bulb rated at about 4 percent efficiency, a household compact fluorescent bulb at about 10 percent and white LEDs at well over 50 percent, and perhaps as high as 75 percent. Having such efficient light in, for example, a solar-powered desk lamp, “is a real game-changer for the developing world,” where many people have no reliable source of lighting, he said.

Ismat Shah, professor of materials science and engineering and of physics and astronomy, discussed the Nobel Peace Prize, awarded jointly this year to Malala Yousafzai and Kailash Satyarthi “for their struggle against the suppression of children and young people and for the right of all children to education.”

Shah began his talk by noting a personal connection; his parents were born and raised in India, and he was born in Pakistan. He said the Nobel committee’s announcement of the Peace Prize pointed out that the two co-winners were an Indian and a Pakistani — two nations often in conflict — and a Hindu and a Muslim. Their connection, Shah said, is their focus on children and their “common struggle for education and against extremism.”

Both recipients of this year’s prize have also received numerous other honors for their personal courage in working peacefully for the rights of children and, Shah said, have served as an inspiration to others.

Satyarthi, through an organization he founded, has protested and worked to free children from forced labor and other forms of exploitation throughout South Asia. He has developed rehabilitation centers where such young people can be housed and educated, and he has played key roles in international conventions on children’s rights. Shah quoted Satyarthi, who said: “If not now, then when? If not you, then who?”

Yousafzai, at age 17 the youngest Peace Prize recipient in history, was already known in Pakistan as an advocate for girls’ education when she gained international recognition in 2012 after being shot and seriously wounded in an attack by the Taliban. Now recovered and living in England, she has become a leading spokesperson for girls’ rights to an education. Shah quoted her: “I had a choice to shut up and die, or speak up and die. I chose the latter.”

Jeffrey Caplan, director of the Delaware Biotechnology Institute’s Bioimaging Center with a secondary appointment in the Department of Biological Sciences, spoke about the Nobel Prize in Chemistry, given to Eric Betzig, Stefan W. Hell and William E. Moerner “for the development of super-resolved fluorescence microscopy.”

The three laureates received this year’s prize for two different techniques — one method employed by Hell and the other by Betzig and Moerner, who worked separately on it — that were used in developing optical microscopes that can see at a scale and resolution that had been thought to be impossible, Caplan said. Previously, he said, only electron microscopes could see such tiny samples, but those types of instruments can’t be used on live samples.

“Due to [the laureates’] achievements, the optical microscope can now peer into the nanoworld,” the Nobel organization said in announcing the chemistry prize. “Today, nanoscopy is used worldwide, and new knowledge of greatest benefit to mankind is produced on a daily basis.”

Article by Ann Manser, with information from the Nobel Prize organization