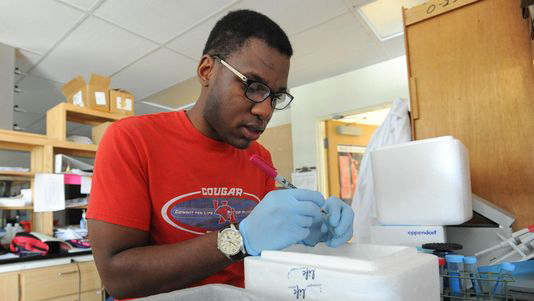 Researchers from Delaware State University and the University of Delaware will be representing the First State this week at the Alzheimer’s International Conference in Washington, D.C.

Their work includes DSU’s study of a lesser-known deteriorating brain protein in mice to UD’s recreation of the body’s blood-brain barrier in a Petri dish so Alzheimer’s drugs can be tested more efficiently.

“If you are putting medicines inside a person, you want to know how well it crosses the blood-brain barrier,” said Dr. Kelvin Lee, lead researcher at UD.

The barrier, which separates blood in the body from fluid in the brain, limits the type of substances that flow to the the central nervous system.

The most important obstacle to the drug delivery into the brain is the presence of the blood-brain barrier, which limits the traffic of substances.

That can cut two ways. You want treatments for the brain to get to it, but you may not want medication for heart disease to cross into the brain, Lee said.

They hope to use the model to study medication such as anti-bodies to fight Alzheimer’s.

Another benefit of being able to test drugs in a petri dish is that the drugs typically are tested in animals. This should reduce the number of animals used.

“It’s real exciting for me and the students have just turned out amazing,” Gitcho said. “I have some real hardworking students down here.”

For the past two years, his students have been looking at the basic function of TDP-43, a protein found in the brain in about 50 percent of spontaneous, not genetic, Alzheimer’s cases.

Scientists have already hypothesized that the increased buildup of two proteins, tau and beta-amyloid, destroy nerve cells in the brain, which causes memory loss and personality changes. But TDP-43 could possibly do the same. When the protein accumulates, neuron cells in the brain die off.

By increasing the levels of TDP-43 in mice, researchers are studying how and if their brains lose memory function.

So far, the mouse models have shown that the increase causes neuron pathways to change and disintegrate.

By studying in the mouse models how the protein works, scientists can begin to see which medications could be used to manage or prevent the disease.

Stephanie Davis, a post doctoral research associate at DSU leading the mouse model study, said she is excited just to interact with other scientists at the conference and show off what they have learned so far.

“They might learn from our work another pathway they want to look into,” she said.

Other students are using toxins to simulate cell stress to see if TDP-43 is increased and looking at the impact of sodium and potassium on cells.

Currently, 26,000 Delawareans live with it or a related disorder.

It’s a great honor that representatives from the colleges will be at the conference, said Claire Day, senior vice president of Delaware Valley Chapter of the Alzheimer’s Association, and it is an especially exciting time for research. More than 70 countries will be represented at the conference.

“I think we are really on the cusp of seeing the end result of some of the longer studies,” Day said.

Even so, progress will take time.

“We are still playing in the minor leagues when it come to the amount of funding we put into research for Alzheimer’s,” she said. Some groups have billions of dollars backing them and Alzheimer’s research has about $500 million.